Another Friday, another Fry-Up.

The weeks have just been zooming by, and I find it practically impossible to wrap my head around the fact that we are but one sleep away from the first day of Christmas (or the beginning of December, if you will).

Wouldn’t it be lovely to wake up tomorrow to a partridge in a pear tree?

Five golden rings wouldn’t be so bad either.

This week I had my last talk with the United Way Speakers Bureau Series. I spoke at fifteen events over the last month and a half, and overall it was a tremendous experience to present for such a varied group of businesses and organizations.

I truly hope I get to do it again next year.

Meanwhile, we are but six days away (SIX!!!) from stand-up comedy fest 2012. Next Thursday is liftoff (laughter wise) and I am SO EXCITED.

I’ve been practicing my material like a practicing thing, and in the most random of places too – in the shower, whilst out running, on skytrain – people must think I’m bloody bonkers.

(More so than usual, and that’s definitely saying something.)

My teacher told me that she’s never before met a young lady who talks as much about murder in her set as I do.

Murder and noses and yogurt. (Oh my!)

First on the docket:

So remember when I was all: I’M NEVER GOING TO DYE MY HAIR MYSELF EVER AGAIN BECAUSE I ALWAYS END UP LOOKING LIKE I HAVE VITILIGO BLAH BLAH BLAH?

It would seem as though someone can never leave well enough alone (or learn her damn lesson.)

You see, recently I noticed that my roots were starting to grow in (grow out?), and I decided that instead of paying someone to touch up what was definitely less than an inch of new hair growth, it would be much easier to just purchase some dye-in-a-box and do it myself.

I went to Shoppers and purchased “Midnight Sky” thinking it would be a great match for my now mostly raven locks.

It’s too bad no one told me that after getting your tresses dyed professionally, your hair can undergo some pretty whacky chemical changes. (Ie. don’t use the box stuff because it won’t change your hair to the colour that you think it will.)

SO NOW I HAVE THESE ROOTS: 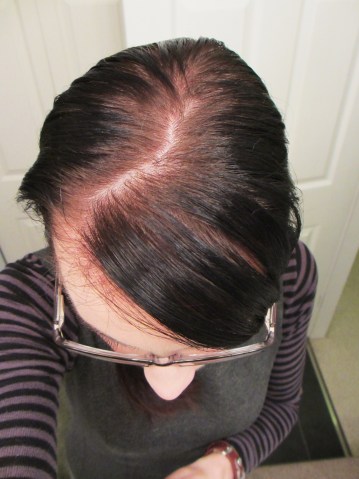 So I’m out coach.

For real this time.

Laugh it up fuzzball.

Look at this computer repair shop!

This makes me happier than you can ever know.

I told Marc that I was going to buy one of these outfits as one of his Christmas presents: 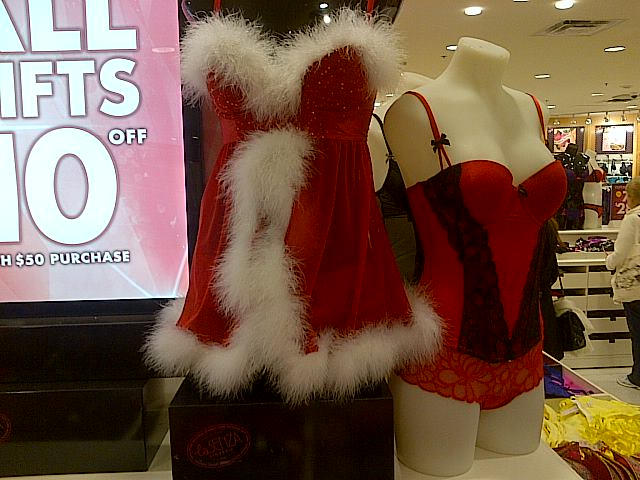 And then I laughed and laughed.

My apologies to all the La Senza Christmas-ware aficionados out there, but for me, these getups are just so ridiculous that I have a hard time understanding how they actually exist in real life.

I mean, come on – in what world is this sexy (and not just amazingly hilarious?)

And don’t get me wrong, if laughter really IS the thing that totally lights your fire, than undoubtedly this sexy Santa (sexy Mrs. Claus?) lingerie is a perfect ensemble for you and yours to enjoy.

But for me, if I somehow came into ownership of such a costume, I would just constantly pretend I was in a Billy Mack music video, while walking around making ludicrous and exceptionally tacky puns about quasi-phallic holiday items.

Your candy cane is so big! Come fill up my stocking… (etc. etc.)

And I would laugh and laugh.

What about you folks?

What’s going down in your neck of the woods these days?

I want to hear all about it. Happy Friday to you all!

Well that weekend absolutely flew by.

M and I keep saying that one of these days we are going to have a laid back, solitary fin de semain – but until that day, we seem to just jam pack our Saturdays and Sundays with as much activity as humanly possible.

On Friday night I made a massive batch of mint pea soup, and parmesan toast and just barely managed break away from the beckoning comfort of my pajamas and the cozy heat of the fireplace, and instead ventured out into the rain to meet up with a bunch of M’s colleagues.

Two of them play in a ridiculously awesome surf band, so we enjoyed a drink (stout for M, white wine for me) and listened to the sweet sounds of what can only be described as a live rendition of a Quentin Tarantino soundtrack.

(Which, to be honest, is pretty the only way I can stand Tarantino – his music, or otherwise.)

The rest of the weekend was a blur of house hunting, runs in the rain, meet ups with friends, runs in the sun, pumpkin carving, shopping for birthday presents, family dinners, and a couple of episodes of Top Gear, just to keep things fresh.

At one point this weekend, conversation turned to bucket lists, and I began to ponder what events or achievements I may choose to populate my own list.

Without spending copious amounts of time thinking it over, I did come across three things that I would really like to achieve within the next year.

1.)    Dying my hair blonde. This was only further exacerbated by my friend Tracy’s e-mail which read:

Wow, imagine you a blondie!!! Doooo it! It would look so hot :) And it’s just fun to muck around with hair colour.

I cannot argue with this logic.

3.)    Send at least five separate pieces of writing to publications in the aim of getting them published.

It’s good to have goals right? And now that they are out here in the interwebs, there’s no going back. I expect all of you brilliant chaps to keep me to my word, okay?

No faffing around allowed.

In the interim, let’s have a dance why don’t we?

What did you cats get up to this weekend?

And what’s on your bucket list (yearly, or lifetime?)

And if you’re looking for a hair dying partner in crime, well then, I’m your gal.

Item no. 1 on my list of “Things I wont ever do on my own again once I become independently wealthy”?

DYING MY OWN HAIR:

I recently announced to the world that I was thinking about dying my hair blond. This proclamation elicited a rather lack luster response, (with the outlier reactions ranging from completely agog, to shock and terror.)

Seeing as though I am giant chicken, this morning I completely reneged on this idea, and I re-dyed my hair 1.5 shades away from black.

(Does anyone really know what blackest brown even means?)

So thanks to L’Oreal, I’m back to my raven headed self.

And if I go outside, children will be afraid to touch me.

Ah well, I’m wearing a sundress, and eventually all this will be washed away.

(Especially the hair dye. In fact, I’m counting on it.)

Have a great, great weekend you beauty cats!