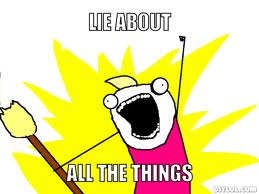 At least so quoth the ever enigmatic, and exceptionally surly Dr. Gregory House who both angered and titillated thirty million North American television viewers at the height of the program’s popularity.

And he was right.  Most people, as much as they would like to admit otherwise, distort the truth in one way or another (sometimes even on a daily basis.)

Why, it’s bloody hard not to.  Take the classic example:

This exchange is the absolute worst. Not only is it shallow and formulaic, but it actually makes me think that we are preconditioned to not tell the truth.

I mean, when talking about fleeting exchanges (picture you and the other person as two ships in the night), I can pretty much guarantee that neither of you actually wants to know how the other is doing when you ask.  It is but a mere formality – an extension of the actual greeting.

In fact, hihowareyoudoing is one pretty much one word, the opener, which is expected under normal greeting circumstances,  while finegreatgoodokay is the expected answer, the closer.

Both parties may walk away satisfied.

I can totally understand why in some cultures you don’t even bother asking this question unless you are prepared to really find out how that person is – because, really, otherwise what’s the point?

Now, I am willing to concede that there is probably at least one of you out there, shaking your head, thinking to yourself, “I always tell the truth no matter how I’m feeling!”

So dear reader, if you manage to actually (sincerely) articulate how you are doing every time someone asks you, I bow down to you and your amazing resolve.

I’ve been known to tell a few porky pies.  And not just about how I was feeling.

I’ve told my husband that I have eaten breakfast when I haven’t, just because he likes to eat right away in the morning and I don’t, and I once told the mother of one of the kids I tutored that I got migraines instead of just outright quitting the job.

(That was one strange kid, believe you me.)

I would watch as these little white lies fluttered out of my mouth, like ivory-winged moths escaping the dark, searching for a light.  They would burn up, the farther up they fly, and I wondered, as I watched them disappear, what purpose did they serve?

To answer this question, I once spent a  day trying not to lie.

Which I found to be hard.  Very hard.

I was unsuccessful on many fronts.  But mostly I was incapable of getting over the hihowareyou hurdle.  No matter how hard I tried, goodgood seemed to get away from me without my noticing.

Every time I would have to take back my words and try again.  But even then I couldn’t successfully complete the task.

What can I say? I’ve been programmed.

And I’m okay with that.

Because otherwise I like to believe that I lead a fairly transparent, truthful life.

And let me tell you this: when I ask you how all you beauty cats are doing, I mean so with the most sincerity.

And that, I promise, is no lie.

10 thoughts on “You can’t handle the truth!”