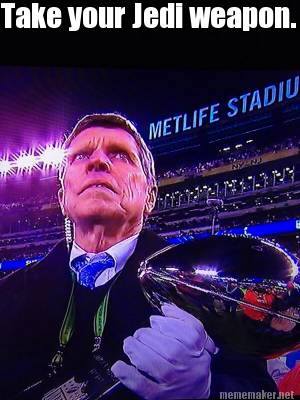 In light of the Seahawks’ absolute dismantling of poor Peyton Manning (and what I can only surmise to be the entire collective Coloradean consciousness), I figured post-game we all needed to bring a bit of levity to the situation.

Because, and I think we can also all agree here, that a slightly more entertaining game, and not just a blow-out of every tire on the Denver semi-truck heading to Nowheresville, would have made for a much more enjoyable three hours of football.

(And to all the glorious, gloating – totally deserved, and encouraged gloating – Seattle-ites –  yes, I too am including you in that sentiment.)

But seriously though, what is wrong with this man?

And why doesn’t he know that, in the end, the light side always, ALWAYS wins?

“A word is not the same with one writer as with another. One tears it from his guts. The other pulls it out of his overcoat pocket.” —Charles Peguy”

I have been thinking about this a lot of late..

I came across this text in the wake of Philip Seymour Hoffman’s tragic death this past week.  Someone commented that, although he was not a writer, he was often reminded of Mr. Peguy’s word when confronted with Hoffman’s seamless, and yet soul-wracking transition from one character to the next.

And of this, I agree.

I cannot say that I have ever been disappointed by any of his myriad performances. Whether disgusting, or delightful, there was always an innate (and oh-so important) humanity to his characters; one that was never forgotten, nor manipulated, or abused.

But truly, for me, Hoffman will always and forever be The Big Lebowski’s Brandt, the most amazingly sycophantic suck-up to ever grace the silver screen. An absolute perfect foil to both the Dude’s lackadaisical, anti-hero, and Walter’s neo-conservative, Vietnam vet (and owner of Sobchak Securities.)

Just listen to this laugh:

I love this movie more than I can properly communicate, and although only a supporting role, Hoffman’s brilliant portrayal of the Big Lebowski’s assistant is the linchpin, of what I believe to be, the best movie I will most likely ever watch.

And I think that’s why I’m thinking about the quote – everything about the film feels as though it is the sum of months, and months of meticulous preparation, culminating in pitch-perfect performances by absolute masters of their crafts.

It is gut-wrenching in its simplicity, and perfection.

You truly can always tell when an individual, or individuals, put everything they have into their art. (I use the term “art” loosely, and define it as anything from dance, to sculpture, to ultramarathon running, to public company auditing.) It doesn’t matter the medium. Gut-wrenching transcends boundaries, or definitions.

It, as I believe as shown by the outpouring of grief over Mr. Hoffman’s death, transcends life.

For my part, I’ve been doing some light crying all evening long.

Not for any real purpose or another.

I watched this video a couple of hours ago, and all I’ve done in the interim is listen to incredibly sappy, emotionally destructive songs, and read about all the insane human rights abuses occurring at this precise moment, all around the world.

Sometimes I think the world is void of anything good.

There is no other way to describe the sensation of emptiness I feel when confronted by such ignorance and inequality.

I want to run away and hide and have Marc’s strong arms wrap around my weak little body and then we’ll just lie that way until our bones rust, and our smiles turn to stone.

This could, of course, never happen.

Because a.) I know how to turn off Youtube.

And b.) because I am, as some of you know, a proper LOVE WARRIOR and if nobody else is going to champion the betterment of this heaving cesspool of a planet, then I bloody well GET ON IT.

Plus my body is jacked.

I am writing a book.

For my birthday I did this to my hair: 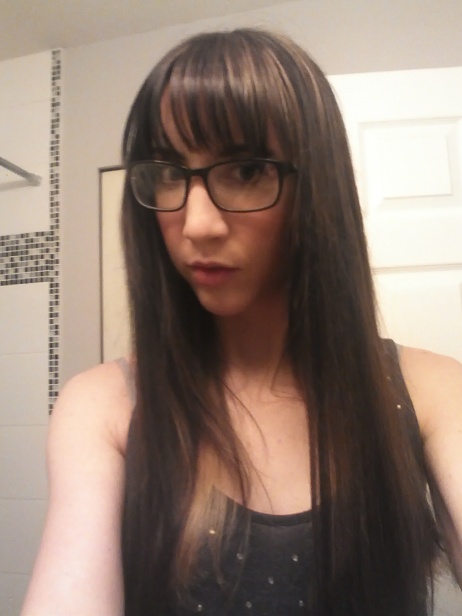 I have been wanting to do something blondy-blond for a while now, but haven’t been able to muster up the appropriate level of courage to commit to the follicle colourization process with gusto.

But I figured I am only twenty-nine once – I might as well do it now before the aliens arrive and I spent the next sixty-odd years of my life making origami toilet paper swans for our six-legged, intergalactic overlords.

They’ll probably want me bald as a baldy thing.

What a sports nut!

Yesterday Marc and I watched A LOT of football.

Now, this is great because I really like football, and I really like Marc, and because both teams that I wanted to win ended up proving victorious.

Also, after watching eight million trailers for what I can only assume to be crappiest TV shows ever to grace the face of this planet, I am fairly certain that all programming on network television is just the crappiest dreck of life.

Seriously when did CBS (and its ilk) become vessels for such unbelievably epic crap?

Has they always been havens of television garbage?

(I am beginning to think yes. Yes they have.)

Also how many pseudo-serial killer crime shows can one world possibly sustain?

And who is naming these programs?

TOMORROW’S PEOPLE? WHO THE HELL WAS PAID TO COME UP WITH THAT IDIOCY?

Anywho, to get away from that on to what I really want to talk about – as we were watching the Broncos dismantle beautiful Brady and the New England Patriots, I started to feel some weeeeeeiiiiirrrrddd feelings.

Mostly, (and I really don’t know how to feel about this) I started to feel grown-up lady feelings for Peyton Manning.

I have had some strange crushes in my time, but I really feel like this one takes the cake.

My favourite thing to come out of this whole grim fandango is the following exchange between Marc and I:

All of us ladies.

I just started watching the first season of Girls (HBO programming for the win!) and I really, really like it.

I thought that I would hate it because everything that I’ve read about Lena Dunham has left me with a fairly sour taste in my mouth, and people just love to dump all over her and her writing, and her white-washed, privileged interpretation of what it means to be a young woman making a life for herself in Brooklyn (not to mention the fact that I feel like this is something we will continue to hear about ad nauseam even long after the show has left the airwaves) –

But again, what can I say?

Luckily for me, I cannot relate to much of anything that these four ladies are going through, but I am sure that there are some young women out there going through similar trials and tribulations suffered by Hannah and her posse each episode (and sweet Buddha help them all).

Are any of you folks watching?

What do you think?

Drop me a line and let me know.

Our voices, heard loud and clear.

So last night my great friend Chelsea co-hosted the Storytelling Show with me and we discussed a whole manner of things, including Youtube, smoking, house purchasing, novel publications, and Liam Neeson (amongst many, many others) and it was just such a rad, fun show that I would love to leave the link for you all if you care to have a listen.

At the very top of the page click to listen to the episode from January 19th.

So that’s all she wrote for this late-January Monday.

I hope you all had a brilliant weekend, and are facing the next four days in earnest.

It’ll be Friday in no time.