The rain is raining folks.

It’s almost as if I can hear each individual raindrop tap, tap, tapping on my window pane.

And on the roof.

To paraphrase Hugh Grant as the Prime Minister of the UK – rain truly is, all around.

Last week we were blessed with one last amazing week of summer weather: temperatures in the mid to late twenties, amazing sunrises and phenomenal sunsets, and blue sky for days.

Yesterday morning we woke up to this:

The eerie weather ended up being an absolutely fabulous pairing to an early morning race.

Two great friends and I ran the Terry Fox Run, a ten kilometer (or five, or two – depending on your pick!) event that takes place every September, in cities all over the world, which raises funds for cancer research.

It also honours the memory of one of the greatest Canadians that has ever lived – Mr. Terry Fox.

In 1980, with one leg having been amputated, he embarked on a cross-Canada run to raise money and awareness for cancer research. Although the spread of his cancer eventually forced him to end his quest after 143 days and 5,373 kilometres (3,339 mi), and ultimately cost him his life, his efforts resulted in a lasting, worldwide legacy. The annual Terry Fox Run, first held in 1981, has grown to involve millions of participants in over 60 countries and is now the world’s largest one-day fundraiser for cancer research; over $500 million has been raised in his name.

There are a few individuals that make me so proud to be Canadian that I’m just about driven to tears when I think about them, and all that they accomplished during their life.

Terry Fox is one of those people.

So around 8am, I met up with Greg, and Daniela, they grabbed some breakfast Tim Hortons (just in case we weren’t feeling Canadian enough already) and we set off for the starting line. 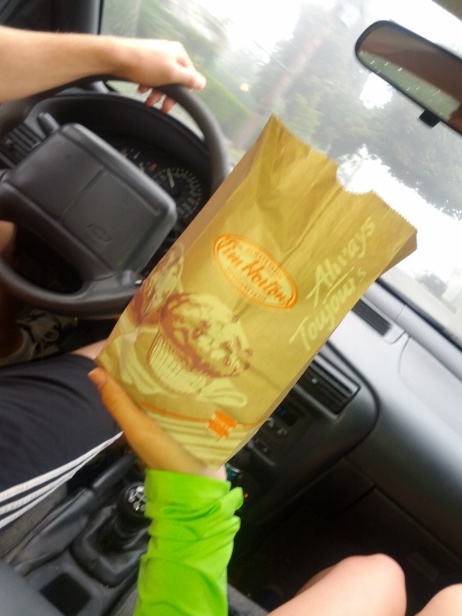 Unfortunately the route was not well marked at all, so we all ended up running different distances, and courses, but in the end it didn’t matter at all.

I’ve been running a lot of late – at minimum thirty kilometers a week. It really is one of the only ways that I can properly unwind at the end of a workday, and I’m not exactly sure what I would do if I couldn’t strap on my runners and head out the door the moment I get home.

It makes me feel whole.

Sometimes I think about what it would be like to just take off and run clear across this massive expanse of a country.

If I could commit myself to something so much bigger than my little life.

I think I could do it.

I think I would do it.

But until that day, I’ll just put one foot in front of the other.

13 thoughts on “Something worth running for”