Running the Fall Classic is always an experience. As the last race of the season, it truly attracts all manner of competitor – from the hard core runner who competes in nothing but teeny, tiny running shorts and (maybe) a tank, to those who have been training all year for – what will be – their very first 10k.

Because of this eclectic mix (and the fact that it’s near always freezing, raining, or winding – or some combination of all three) the day is marked by an atmosphere like no other.

There is a real camaraderie in the air.

I chalk this up to one BIG reason:

The people taking part really want to be there.

I mean, why else would you subject yourself to the late-Fall elements on a Sunday morning in mid-November? Off the cuff, I can think of a few things that may be just a tad more comfortable (and warm, and cozy) than careening about UBC while fat, frigid raindrops spatter your face, and soak your runners.

(Just a couple mind you.)

For me, as much as I love the blanket forest I like to call a bed, I really wanted to end the (running) year on a high note, and knew that taking part in this run was just the ticket.

So come Sunday morning, I picked up the lovely Ms. Alannah (from her own bed of rest), and together we drove into campus.

(Side note: UBC has changed so much since my time there as a student! It was mind blowing to see all the new residential and retail developments that have popped in areas that once were nothing but a home for trees.)

As we neared the student recreational building – where I was to pick up my race bib and shirt – I realized that I had forgotten my wallet at Alannah’s house. Never one to waste an opportunity for a minor spaz attack, I quickly bellowed, “MY WALLET ON NO HOW WILL WE PAY FOR PARKING THE DAY IS OVER!!!1!1!.”

Luckily, my co-pilot, being much saner than I, whipped out her trusty pay-parking app on her smart phone. Before I had a chance to even squeeze out one anxiety-related tear, she had paid for three hours of parking, and had taught me how to top up in case we needed more time.

Then it was off to pick up my gear, check my bag, and head over to Irving K. Barber library (a warm, dry haunt situated right next to the start line) where we got the chance to glimpse the leaders of the half-marathon (they started an hour before us 10kers) as they flew by, finishing their first lap of the course. 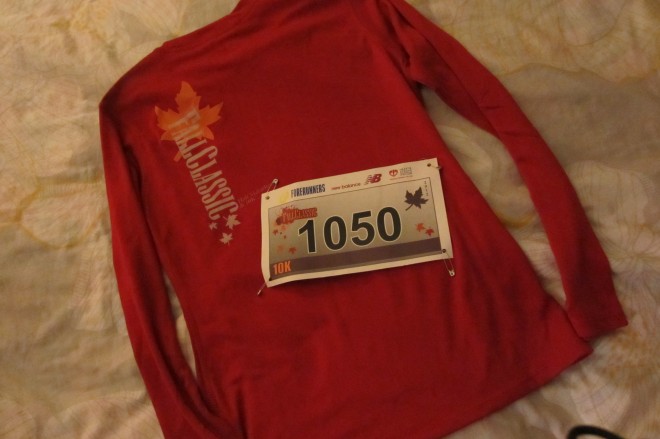 Before we knew it, it was already 9:30 and time for us to take off.

Just standing outside for five minutes before the gun went off was enough to put a wee chill into my bones. I was wearing long running pants, a compression shirt, my tough mudder t-shirt, and a toque, but even still, the wind was winding, the rain, raining, and the cold, colding.

I couldn’t count down the seconds fast enough.

It’s always a bit of a mad-dash-gong-show whenever the gun goes off. You’re trying to find your pace, and your place among all the other runners, trying not to clip anyone’s heel, or box someone out.

Again, I felt that my speed was fast, but not uncomfortably so, and I figured I would go just go with the flow – pushing my body, but not to the point of distress.

Speaking of which, the women with whom I ran the majority of the race sounded like a bloody train! I was so worried that she was going to collapse, or burst a lung, what with how hard she was breathing (and from the very outset at that!) Talk about incredibly disquieting and discombobulating. I let her run ahead for most of the course, and then ran past her in the final one kilometer.

I’m not going to pretend as though this didn’t fill be with a little bit of (perverse) happiness.

Anyways, back to the course, as the gods wept overhead, we zigzagged along Marine Drive, enjoyed a few stunning ocean vistas, and cowered in the shadows of the foreboding, but beautiful tree line that decorates much of this stretch of road.

When we turned around at the 5k marker, the wind immediately died and it was at this point that I realized wearing a toque may not have been the brightest idea.

In the words of GOB: I had made a huge mistake.

In order to save my head from exploding due to extreme heat build up, I yanked it off and mashed it into my pants’ pocket. At first this was mega-weird, and I felt a tiny bit conspicuous, what with the giant bulge I was now sporting on the left side of my body, but after about thirty seconds I promptly forgot that it was even there.

It will make you forget about anything.

As we snaked back through the university, my stomach began to feel a little queasy, which only served to make me run faster.

My legs were feeling a little stiff, but I tried to power through this (slight) case of lethargy.

Before I even knew it cow bells were being rung in every which direction and I was just powering it with everything I had to get me across that finish line.

It’s been so long since I last ran a 10k (in a race) and after three consecutive half-marathons, I was a little incredulous that the whole thing was already over.

I congratulated my heavy-breathing running mate on a race well run, before heading towards the Student Union Building (or as we affectionately call it, the SUB) to change out of my gear. I phoned M, let him know how the race went, and then returned to the finish line to cheer on Alannah as she completed the course.

Overall, I ran a solid 42 minute race, and was the 13th female to finish (57th overall)

For a rainy, windy, cold, cold day, I couldn’t have asked for anything else.

Although the delicious syrup, and raspberry soaked waffles I inhaled at brunch were a fabulous bonus.