I did a lot of crazy stuff as a kid.

(This probably shouldn’t come as a surprise to any of you.)

In grade two, Ms. Nolan (full disclosure: I LOVED HER) asked us to bring in props for our “class store.” We were going to learn how to add and subtract integers through the purchase of goods on sale in our shop.

The student buying the products would have to add up the price of their groceries, while the cashier would have to calculate the correct change owed.

As a class, we were darned excited about this math unit.

Now, other kids brought in cereal boxes, soup cans (that had been – responsibly – cleaned and dried), kraft dinner packages, and egg cartons.

And what, you may be asking yourselves, did young Ethel bring to the project?

A jumbo box of Eggo waffles and an (empty, thank goodness) twelve-pack of Labatt Blue.

That’s class with a K right there folks.

For all you non-Canucks out there, LB is a kind of beer. And a pretty bad beer at that. (Actually, I’m pretty sure it doesn’t even exist anymore.)

Ms. Nolan must have been pretty flabbergasted, especially because our grade four buddies had come down to help us set up shop (literally) and bunch of them were play-acting drunk, slurring their words and taking pretend swigs from the bottles.

Needless to say, most of my props went home with me that day.

Though the Eggos stayed.

Flash-forward to grade five. We had a student teacher named Michael, who was wonderful and completely lovely.

He was patient and soft-spoken, was always excited and dressed really well.

(In my memory he’s about fifty-nine, but in reality the guy couldn’t have been older than twenty-six.)

And as a class, we used to make him sweat like long-tailed cat in a room filled with rocking chairs.

And I, I was a chief culprit of this stress (though not of my own volition or intention.)

One of the assignments he got us involved with was a cross-Canada anti-smoking campaign, which was also a competition to see who, out of all the elementary students across the country, could create the best anti-smoking poster and catch phrase.

In order to participate, you had to finish the sentence: “If you smoke – …”

I’ll never forget the winner from the previous year, because my ten year old self thought it was absolutely freaking brilliant, and the poster looked like it had been drawn by a professional artist.

If you smoke, you’ll be hooked!

The accompanying picture was that of a really sad killer whale being fish-hooked by an evil (and obviously soulless) smoking henchman.

Aha, I thought to myself. This was what we had to live up to!

So what did I pull together you might ask? Did all my hard work ensure my victory?

Well, I’ll let you decide for yourself.

My slogan was: If you smoke, you’re just a butt!

I mean, who would want to do anything that reminded them of bums? No one, that’s who!

My poster, while a little avant-garde, was sure to wow the judges.

This is (a recreation of) what I drew:

Needless to say, I think Michael may have had a heart attack when he saw this.

He kindly let me know that there was no way, not for all the tea in China, that he was letting me send in a poster that depicted a bare ass smoking a cigarette.

I fought back hard.

At this point I remember his face getting really red – not from anger I’m sure – but more from the fact that if he didn’t laugh soon, his entire head would explode.

In the end, I received an A on the project and I got to keep my slogan, but I had to go home that night and make a new poster.

So this was the one I sent into the competition: 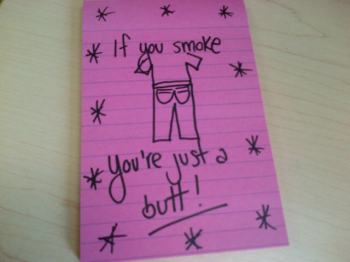 (The stars are the cigarette butts – I was too lazy to draw them out again.)

Needless to say, I didn’t win.

But hey, it wasn’t a total wash. In fact, looking on the bright side, I don’t smoke, and if I ever hear someone say that a person has a “smoking ass” – well – only I know the real truth of the matter.