So a couple of weeks ago I wrote about an ad in the women’s change room of my gym – an ad that was giving me so much grief that every so often I felt as though I was going to have a panic attack on the treadmill.

A few days after I published that post, I finally reached my breaking point – the time for action was nigh.

In the parlance of our times: it was do or die.

I’m proud to say that instead of taking a sharpie and writing “HEY GROSSO! YOUR STRETCHMARKS MAKE YOU SUBHUMAN, SO GIVE UP AND JUST EAT THAT BURGER WE ALL KNOW YOU SO DESPERATELY WANT!” in an attempt to force them to take down the ad (due to my subversive measures) I decided to take the high road and speak with the young lady who works at the front desk.

In all honesty, I was actually pretty nervous as I approached the counter-cum-smoothie bar.  I knew that I wasn’t being unreasonable bringing up the ad, but I couldn’t quite shake the feeling that I was going to come off as unreasonable.

However the thing that I am most ashamed to admit, is that more than anything, I was afraid.  I was afraid that she was going to judge me as an overly sensitive and insecure about my body.

I was afraid that she would tell me that the ads themselves weren’t the problem – I was.

Which definitely made me pause and question whether or not these fears had any merit – not in so far as I actually believed that this young lady would resent me, or formulate conclusions on my self-esteems based on a  two-minute interaction, but rather if this fear of a perceived lack of confidence existed outside of this made-up scenario.

I don’t have a simple, clear-cut answer.  It’s something that I’ve given a great deal of thought to, and will continue to do so over the next little while.

I can tell you that my conversation with the girl at the front desk was short and extremely positive.  She seemed surprised that I was bringing up the ad, letting me know that she had never really given them much of a glance herself.  I don’t know if this is true or not, but she readily agreed that a more body/self-positive message would probably better fit the whole gym ethos.

Overall, it was a darn positive experience.

And the best part?  The next time I went in the ad had been changed!  Now I get to stare at this as I change into my gym strip: 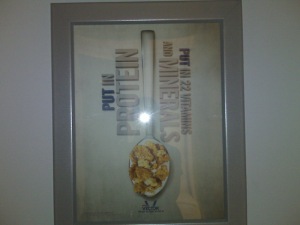 E to the D is making the world a better place – one step at a time!

As an addendum to this post, can we all agree on the overall greatness that is Jurassic Park – both the book and film?

This evening my husband and I were waxing eloquent on the impact these two works had on us as young things in the early 90’s, and seriously, I think I’m going to find a used copy of the book so I may relive the memories.

But let’s just get one thing straight – no one is EVER going to survive 10,000 volts. Right?  I mean, come on.  Dinosaurs from mosquito DNA I can handle, but human BBQ from a T-Rex enclosure?  Not. A. Chance.

Also, anybody hear that? It’s a, um… It’s an impact tremor, that’s what it is.  I’m fairly alarmed here.