Sometimes you wondered, “What the heck I am I doing here?  I don’t have to be here…going through this.  And then you liberated a village and these people came out from – I don’t know where.  They came out and then you knew why you were there.”

“I was scared.  I was really, really scared.  But you just had to keep moving forward.”

Both my grandfather and my husband’s grandfather served in World War II.  M’s grandfather enlisted when he was sixteen, and fought for six years in North Africa as a member of the British Army.  My grandfather was eighteen when he joined up with his three best friends, and stormed Juno beach on June 6, 1944.

“You either grew up right then.  Or you didn’t grow up at all.”

Today I remembered our grandfathers.

“We stand for two minutes.  What do the dead stand for?”

I remembered that remembrance should be inclusive and not divisive.  I remembered that although the world’s processes and organizations are constructed and legitimized by absolutes, binaries and ideologies, and that we must work to move past these if we are ever to contemplate, let alone achieve, peace.

I remembered that it is these constructs that allow us to strip a person of their humanity, to strip an entire nation of the same.

Complacency may not equal acceptance, let alone action, but can it equal complicity?  How quickly are these conceits internalized?  Does internalization equate acceptance?  And how quickly does this manifest into action, conscious or not?

“The two things you needed to stay alive where your shovel and your blanket.  As long as you had those two things, you might live to see the next day.”

Today I remembered that there are those today, who join the military because they believe it is an avenue to help others.

I think people sometimes forget this.  I do.

I remembered the war to end all wars.

“We got to live.  We got to come home and have families.  They didn’t.  There were some people who didn’t even make it off of the boat.  They were dead when we got there.  How many people stop to think about them?  How many remember?”

But it is easy to forgot.

And continue to forget.

And if we did, would we remember? 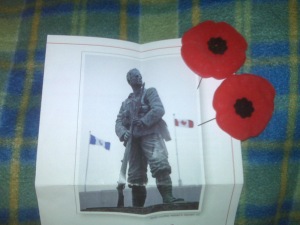 One thought on “Though poppies grow”