My mother is currently enrolled in a Russian History course at one of the local Halifax community colleges.  She phoned me in a panic the other morning, nervous over the fact that she had signed up to a debate during her next class – she was to take the side that the USSR was the primary cause of the Cold War.

She asked me for my help and instead of yelling, “THAT TOPIC’S A LITTLE TOO SHALLOW EH? WHO IS YOUR PROF?  GOOD OL’ JOE MCCARTHY?  THIS IS NOT AN INTERNET NEWS SITE COMMENTS BOARD – YOU CAN’T JUST BLAME ONE SIDE!” I readily offered my assistance.  Little did I know that I was agreeing to a little more than an ear to bounce ideas off of.

If you’re reading this mom – no more freebies!  Do what all the other cool kids are doing: it’s called Wikipedia.

As a postscript, or palate cleanser, to the information I put together for the impending debate, I would like to share with you a memory from my time in St. Petersburg.

One morning I walk to the Soviet memorial commemorating the 900 day siege of Leningrad.  This proves to be an excellent lesson in how to properly read maps and scale diagrams.  It seems as though my ability to master this is minimal.  I suck.  Truly.  The ten mile trek took upwards of three hours and I briefly considered living at the war memorial for the rest of my stay, instead of contemplating the trek back. 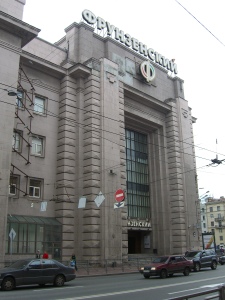 Along the way, I passed roughly seventy uniformed and armed police men, who I suppose are told to stand with their backs straight and lips pursed, and to spread out equally four to a block.  Having passed the one hour mark and with no memorial in sight, desperation slowly began to set in.

As I approached one of officers to ask if I was going in the right direction, I truly regretted my choice to wear my grey t-shirt spackled with sparkly clouds and rainbows.  I figured my looked screamed stupid tourist.  Yet when he turned to face me, I lost both my apprehension and vocabulary.  There was no way this officer was any older than sixteen!   His thin frame was swathed in an ill-fitting uniform, and the way his eyes kept darting back and forth, it made me feel as though I was asking him out.

I pointed to the memorial on my map and asked him in broken Russian, “This place, long or short distance?”

I wanted to scream.  Of course I knew the memorial was round!   What I really needed to know was whether or not I’d make it to the place by nightfall.  Unfortunately, he seemed to think the conversation was over and so I left, hoping that as long as I stayed the course, I would get there eventually.

And get there I did.

In the block leading up to the memorial, I encountered a monstrous statue of Lenin, surrounded by three beautiful water fountains.  They serve as an introduction to one of the city’s oldest government building; its grand, Victorian architecture stood in stark contrast to the cubic glumness that marked the many Soviet buildings I had passed by that day.  I watched people eating lunch on its steps, while others held hands, sitting in twos on the manicured grass.

Try as I might to take a photo of the scene, the mangled power lines mashed across the skyline and the non-stop traffic wreck havoc with my shot.  The statue of Lenin stands unopposed – daunting in the foreground.

The memorial itself, Ploschad Pobedy, serves as a round-a-bout at the mouth of one of the busiest entrances to the city.  It is large.  Beyond large.  Humungous.   My knees knock together as I walk to the center of the circus.

A forty-eight meter high obelisk penetrates the clouds above while giant marble statues of bare breasted women and aged men stand defiant in the face of an unseen enemy.

Their faces scream of a rage and sorrow that I will never know.  Their hollow cheeks and sunken eyes speak of winters so harsh and unrelenting, that those who looked healthy stood accused of consuming the dead, because there was never any food to eat.  Day, after week, after year they watched their staircases freeze, along with their water supplies and their children in their beds.  Tanks, though immobilized, roll on for eternity.  Machine guns fire with an endless supply of bullets.

Around these statues, dilapidated apartment buildings crumble before my eyes.  A sour faced babushka drags her grandchild into a consignment store, whose window displays are crammed full of mismatched shoes and bar laundry soap.  In front of me a family takes photos in front of an ever-lit flame.  They all laugh as a little boy pleads with his grandfather to pull him onto his shoulders.  I wish so badly that someone, anyone, could be here to witness this with me.

As I walk into the museum, the eerie tick-tock of a metronome punctuates the stale air.

My city guidebook tells me that it is supposed to represent the city’s heartbeat that never stopped, has never stopped despite the challenges it has faced throughout its lifetime.  The hallways and rooms are dimly lit by nine hundred lamp-shaped candles; each one serve as a reminder of the nine-hundred day bombardment that this city somehow managed to withstand.

I slowly walk by glass cases filled with German shells, Soviet identification cards, rusted bullets and chipped mess tins.  At each end of the room the walls are decorated with a magnificent mosaic.  Each was constructed from the thousand of kilograms of broken glass that littered the streets throughout and after the war.  I stare at soldiers who cling to outdated guns.

Explosions that rock buildings and sever limbs.  Children who wail, bombs that fall, worlds that collapse.  Minute after minute ticks by as I stand in front of these works, my breath still.  Tears slip down the sides of my face, into the dips of my ears, into the corners of my mouth.  My body gives in to an ache that heaves and swells with each beat of the heart.

As I move to trace the mouth of a young soldier the woman behind the desk stops me.