Yesterday I drank a beet-berry smoothie.

But mixing the two together in a smoothie was a little like drinking a (strangely sweet) emulsified garden.

That is definitely one sentence I never really imagined I would ever be writing.

Thank goodness that the drink was at least red, because goodness knows I cannot abide a green smoothie. Anytime I see someone sucking down some horrid kale-spinach concoction, I always think the same thing:

“It looks like they are drinking a salad’s tears!!”

So anyway, the following facial expression pretty well sums up how I felt the entire time I was consuming the beverage: 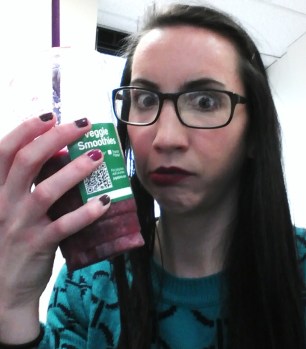 Not good. But not bad either.

I’m fairly certain all of you are staring at your computer screens thinking: WHAT THE HECK IS SHE TALKING ABOUT?

To which I reply: BACK OFF YOU KALE MURDERING BASTARDS!!

I mean, what I’m trying to say – in the most roundabout way possible – is that my life at the moment feels like one massive beet smoothie.

Ya know what I mean?

I’ve been feeling all over the place of late, stretched a little too thin by the GIANT ROLLING PIN OF LIFE and I’m having a little trouble trying to keep myself together.

And I really hate it.

I really hate feeling like I don’t have my stuff together.

But mostly I despise feeling like I don’t have my stuff together when my stuff IS actually together – all neatly folded away in colour-coordinated drawers (or hung on sweet plastic hangers, and not those awful cheap wire ones that always end up sagging in the middle) if you get my clothing-storage-focused drift.

Seriously friends – WHAT IS WRONG WITH ME?

It’s like my Type A insanity is at an all time high.

For all you other TAers out there, how do you cope when you’re certain your manic perfectionism is taking over your life?

Normally a solid week of 9 pm bedtimes has me feeling right as rain, but I’ve having a hard time getting myself together this time. Any advice you have to help me stop BEETing (heh) myself up would be much appreciated.

In the interim, shall we see what’s frying up on YE OLDE FRIDAY STOVE?

Forsooth, and forthwith my good chaps!

Clean as a whistle.

Now, normally I wouldn’t get all shirty over a pre-washed bag of lettuce, but TRIPLE WASHED?!

How dirty were the leaves to begin with? And how anemic was the water spray that they were using? Where you using something other than water to begin with? Who was doing this washing?

This notation had me so freaked out that the entire time I was eating my salad all I could think of was: I AM TOTALLY EATING ALL THE RADIATION AND OR COMPOST.

Side note: Am I the only one who eats the entire bag whenever picking up one of these things for dinner? I always think that it will last me at least two servings, but nope! I hoover that stuff down like it’s a beet-berry smoothie.

So just the other night I finally sat down and watched Guy Ritchie’s Lock Stock and Two Smoking Barrels.

I remember when it came out and it was THE FILM amongst all of my guy friends (it, and Boondock Saints.) I don’t know what exactly it was that made me so resistant in the first place, but for some reason I just never got around to viewing it.

Over the years I somehow began conflate it (and other works by GR) with the films made by Quentin Tarantino, which only hardened my resolve never to watch it.

I won’t get into a diatribe on the subject, suffice to say that I don’t and most likely will never enjoy Mr. Tarantino’s films, as I believe him to be a psychopath.

I loved how every scene looked as though it filmed through the filter of a really dirty window. Or the bottom of a wine bottle.

TIME TO SLEEP FOR THE NEXT TWO DAYS?

I don’t know about you folks, but I think I’m going to be following Nymeria’s lead.

What are your thoughts on squeaky clean lettuce leaves? Are you a fan of Guy Ritchie’s cinematic oeuvre? And what are you plans for the weekend?

Put up your feet, and rest awhile.