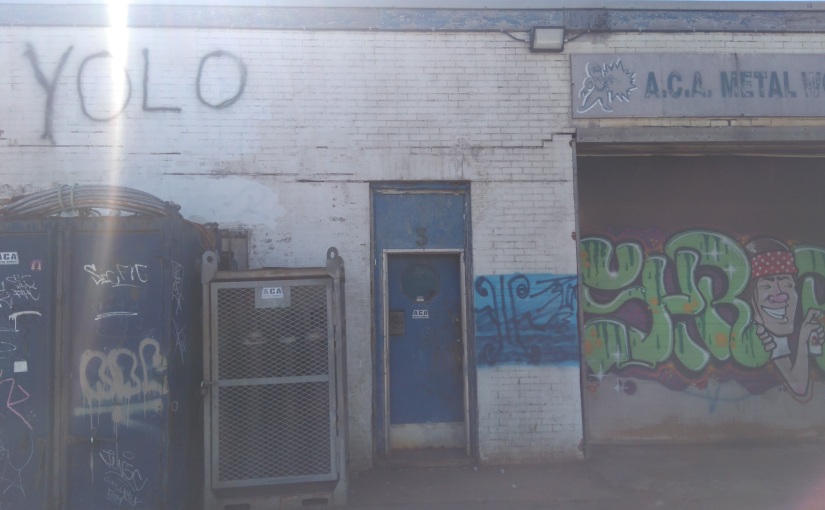 The east coast is humid as hell. The minute you walk outside, you are beset by a sticky, smoky, mug.

The coolness of our house is misleading. I am always sure that I am going to be cold during the first few minutes of my morning run. But that is nothing but a clever ruse on behalf of Nova Scotia Heating and the fact that we live in a very, very old home.

What I wouldn’t give for even a minute of respite from the oppressive exhalation that greets me as I turn to lock the front door. The world feels like an unwanted whisper from a strange man on a strange train.

Suddenly everything is too hot. Too close.

And my discomfort is palpable. 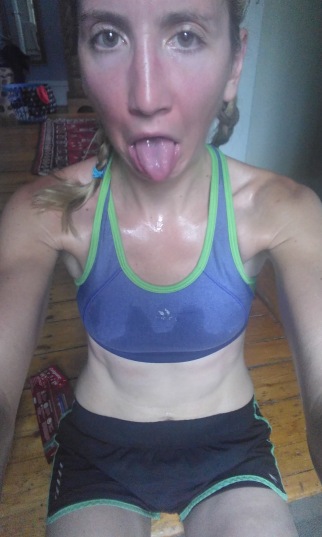 But it never stops me from running. If anything, it just makes me faster.

I have the mistaken belief that the quicker I run, the more wind resistance I might generate on my flushed and sweat-steamed face.

And while I have yet to see any rewards for my efforts, I keep trying.

Other than three days flattened by a brutal flu, I have run almost every day since coming to Nova Scotia.

I race about the different neighbourhoods of my adopted home. My favourite routes take me to Point Pleasant Park and up to the Citadel. I careen along the South End’s tree-dappled streets, dodging new students moving into their bachelor apartments and soccer moms walking their huskies and duck toller retrievers. I ignore the workers re-paving the road outside of the old military barracks, and sprint past the tourists taking photos of the clock tower.

I have always had a tendency to make up stories about the different people that I encounter on my daily adventures, and since moving to Halifax my internal narrative has delved to new depths.

That man on the corner? Oh, he’s waiting for his man on the inside. But where’s the drop? Where’s the microfilm? Is it up that tree? Or has it been stashed around the corner, behind the fire hydrant? And is that even a real arm brace? Or is it a cleverly disguised weapon?

By the time that I’ve figured out his entire backstory (he’s on his way to meet an ex-CIA operative who he has been trying to get out of the game but who keeps getting dragged back in because of that one shady incident in Dubai twelve years ago), I am half way home.

But not before I espy the woman who just returned from reuniting with her estranged brother whom everyone thought had died in that tragic ocean kayaking accident. It just turned out that he owed money to a man from Havana and had to disappear for a couple of years. She was afraid to tell him that she had sold all of his belongings to put herself through a two-year pottery course, but he was just happy to see her. She told him that she would help him out with the money she makes from her artisan salt shaker business.

Or something to that effect.

The more I make up stories about the people I see, the more it astounds me that anyone can really purport to know anything about anyone.

I am currently reading Dan Simmons’ The Terror, a fictionalized account of Franklin’s doomed expedition in search of the legendary, and always elusive Northwest Passage. It is engrossing and horrifying and I find myself completely sucked in by Simmons’ reimagining of what it was like to be a crew member of the HMS Erebus or Terror.

Talking to Marc the other night, I exclaimed, “My God, Franklin was so dumb. I cannot believe what a loser he was.”

To which Marc very kindly reminded me that I was in fact reading a work of fiction, and we would be hard pressed to really know what anyone was like on that expedition, what with everyone having frozen to death in the barren wasteland of Canada’s Arctic Archipelago.

I quickly acquiesced that he was right.

But I remained rankled. It just seems too true to let it go.

So I’ll just keep making up my own stories.

As I sweat through the mug.

There are times when I think to myself, “Will I ever grow up?” 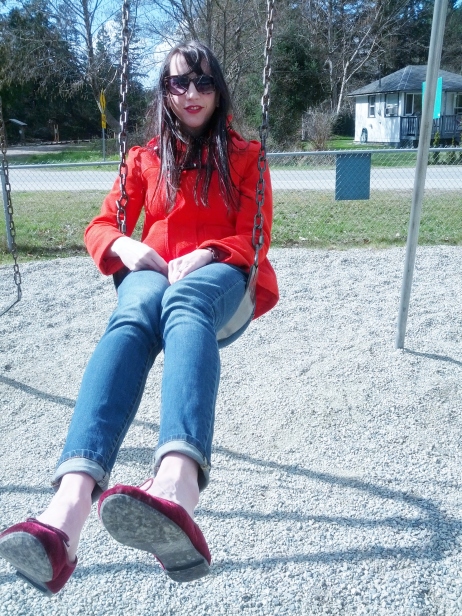 Sometimes it is when I am speeding along the highway blasting some terrifically terrible pop song du jour, or buying sluprees at midnight, or laughing so hard that I snort.

(Because it’s either that or pee my pants.)

Will I ever grow up?

And what does this even mean?

For all intents and purposes, I live a relatively “adult” life.

I have a mortgage.

I have a BA and an MA (although I am missing the PhD to complete the trio.)

I am gainfully employed.

I pay my taxes.

But then again, do any of these things actually constitute “adultness”?

Or is it just evidence that I am, on paper at least, a compliant citizen?

And in the end, isn’t it this all [picture me gesturing about the place] just play acting?

When we were little girls, my sisters and I lived in worlds of make believe.

While Jessi and I got to inhabit the kookiest of characters, Kate, being the eldest, was always saddled with the most vanilla of roles, which usually included “Owner” or “Nanny Kate.”

(For whatever reason, our otherwise shockingly powerful imaginations seemed to run out of steam when it came to her parts and their accompanying monikers.)

In one iteration of our fantasy world, Jessi and I played Shampoo (pronounced Shaum-poo) and Squirt, two extraterrestrial creatures who lived with Owner.

Shampoo (in my imagination at least) was part bulldog, part Tasmanian devil, part vacuum cleaner. He was a little ball of fury, always tearing about the house, and to the best of my knowledge, foaming at the mouth.

Jessi (who never had very complex speaking roles with any of the characters she portrayed) mostly just made crazy guttural gnashing sounds to communicate Shampoo’s feelings.

Squirt was long, blue, and strangely collapsible. As we walked to school in the mornings, Kate would press down on my head, and I would chirp, “SQUIRT!” before crumpling down into a low squat.

(I always pictured his body as the middle part of an accordion.)

Squirt was from a pacifist alien tribe, and never wanted any trouble. Thinking back, I’m pretty sure the only thing I could say whilst in character was also just, “SQUIRT.”

A couple of budding linguists we were not.

Now Shampoo hated Squirt, and was always trying to eat him. So as you can imagine, most of the game involved Shampoo running after Squirt, with Owner every so often stepping in and playing intermediary.

(I think this was Kate’s genius idea to let us play 90 per cent on our own, tire ourselves out, and then step in when the time was right for a brief hang out.)

After watching the latest episode on YTV (best Canadian youth television channel EVER), I would dress up in my highland dancing outfits, and then creep upstairs to my parent’s bedroom.

There I would sneak into their closet, and dig out my Dad’s old tai chi swords from behind my mom’s many shoeboxes and Hudson’s Bay Company shopping bags, (and other miscellaneous OLD PERSON detritus that was lying about).

Then I would choose between the long, thin blade and the fat, curved sabre.

I normally went with long and thin.

Fatty Curve (copyright) always seemed like something the bad guys would use.

From there I would race about my house, pretend-battling alien evil-doers, and then quasi-make out with my hand (in lieu of a real-life Tuxedo Mask.)

This was the main difference between my world and the television show: I never needed a man to come and save me at the last minute. I did my own butt-kicking, and saved the disguised suitor for kissing (and other general pretend-boyfriend duties.)

I am twenty-two years old and I am walking home from the gym.

It’s summer, and therefore quite warm. I can feel the sun baking down on my sweaty, salt-licked skin.

I am listening to my “I JUST FELT LIKE RUNNING” playlist, which basically consists of any and every song that makes me want to get up and dance.

Pretty much anytime I am going anywhere listening to music I imagine that I am in a movie, and whatever song I am listening to turns in the de facto score of Miramax’s newest release: MY LIFE – THE FILM.

As I near my apartment building, Metric’s Poster of a Girl begins to play.

I try everything in my power to not dance.

I kind of shuffle a bit, and maybe side step once or twice.

I even try to speed up my pace, thinking that the sooner I get home, the less likely I am to break it down in the middle of the Ukrainian church parking lot.

My body is physically incapable of not dancing to this tune.

So I just give in, and dance like I am in the credits of some absolutely ridiculous teen comedy, (probably titled “Gym Nuts!” or something equally as trite.)

After a little while, I manage to regain my composure and continue my walk home.

That is of course, until I realize the painters working on the building next to mine have been watching me the entire time, and burst into spontaneous applause after I finish.

I am torn between pretending nothing happened and running away.

And then I run away.

Now I’m pretty sure that I am still all three of those people – SQUIRT, Sailor Moon, and mad-dancing gym nut.

And I don’t think any number of “adult” qualifiers will ever change that.

I mean what, my friends, would be the fun in that?