Do you ever wake up in the morning and feel the urge to dress like Amélie?

So this past Wednesday I put together this little outfit:

I snapped this photo whilst out on a walk-around of Forever XXI’s latest megaplex, a monstrosity currently talking up a huge chunk of (incredibly valuable) downtown Vancouver real estate.

FYI – upon dressing myself this way, I had no choice but to help a blind man make his way to the metro station, all the while whispering in his ear, describing all the comings and goings of the busy streets we travelled.

So that actually didn’t happen.

Anywho, I only found myself at Forever XXI because I had a lunchtime hankering for some dressing room mischief, and I had arrived with the express intention of trying on absolutely bonkers clothing.

However, this plan fell by the wayside pretty quickly, as upon my entrance to the store I was greeted by a number of darling dresses, and I realized that I would much rather try on a bunch of adorable pieces than wreck myself laughing over a completely crackers floral jumpsuit.

I scampered about, scooping up a few things here and there, and eventually purchased two dresses, of which the following is one: 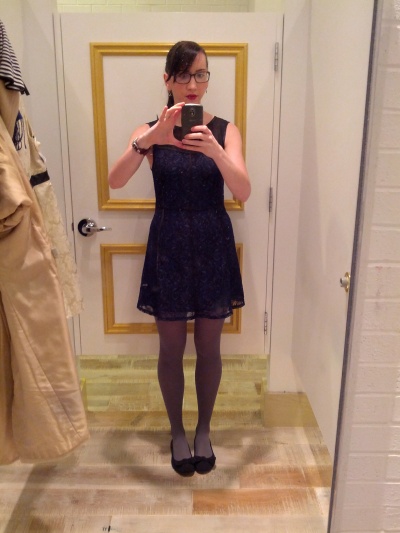 I actually wore this dress last night at my stand-up show, along with a black and gold sweater, and brown scarf.

And guess what! I’ve been booked into doing two more shows this month, so I’ll be jamming tonight AND on the twenty-fifth. Meep.

Even cooler? These are both Friday shows, which I can only surmise to be proof of the fact that I’m moving on up in the comedy world.

So in honour of Friday awesomeness, let’s get this fry-on on the stove.

So I was loitering about Sephora like the creeper that I am (okay, I was actually just using the store as a short-cut on my way back to work from lunch) when I saw this:

HOW TERRIBLE IS THIS – I CAN’T EVEN.

Why, how utterly generous of you Clinique!

I mean, had I been in charge of this campaign I would probably have gone even bigger and marketed the whole thing as: “Fifty shades of beige!”

I mean, first, how many different variations of white can a company possibly make?

Maybe Clinique should spend some of their research and development dollars on creating a product (or, you know, products) geared toward the myriad of women out there whose skin tone doesn’t fall under the general category of “eggshell.”

Canada is pretty darn multicultural. The concept of diversity (and the fact that when diversity exists it should not be ignored) isn’t that hard to understand.

If anything, advertisers should be interested in providing a diverse, inclusive product, seeing as though it’s pretty common knowledge that the larger client basis a company appeals to, the larger their revenue.

Honestly, I totally get the creeps when confronted with this kind of crap – like when I see nylons or pantyhose (PS I HATE THIS WORD SO MUCH) labelled “flesh tone.”

Flesh tone for WHO?

I tells ya – white privilege. Coming to a store near you.

I took a photo of this sweater in H&M the other day because this style will never stop making me laugh. 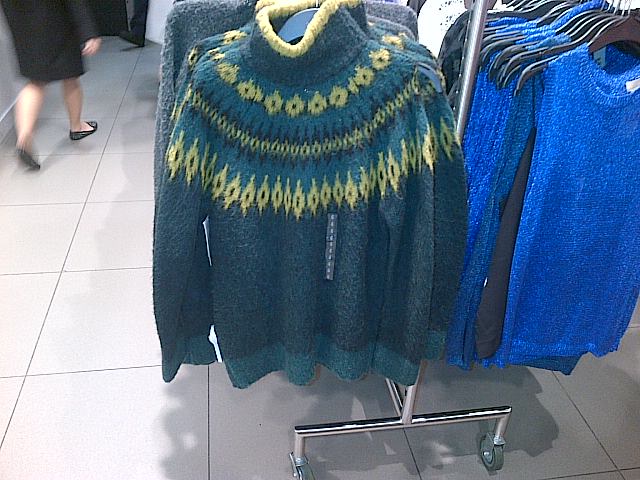 I believe Noel Fielding put it best, when, wearing a sweater very similar to the one above, he said that he looked like a 1970s Swedish film director.

And I will never stop thinking otherwise.

Also, if you are unacquainted with the absolute madness of Mr. Fielding, I would recommend introducing yourself as soon as possible.

Maybe start out with a little Never Mind the Buzzcocks, then make your way over to the IT Crowd, and then finish off with The Mighty Boosh.

Disclaimer: the latter show is totally nuts, so if you don’t like anything as odd as Kids in the Hall, this might not be the stuff for you. Just stick to Buzzcocks and IT Crowd.

So that’s all she wrote, you beauty cats you.

The west coast weekend weather is supposed to be off the charts brilliance-wise.

I wish you all the same, and more.

Up here in the Great White North (GWN) it’s the Victoria day long-weekend. You see, us Canadians have never been able to fully quit the British monarchy, and as such, the Queen’s mug is plastered all over our currency, we get to compete in the Commonwealth games, and we are gifted an extra day off every year, always around this time.

I’m no fan of the English royal family by any stretch, but when it comes to statutory holidays, I’ll take it.

Tomorrow is Mr. M’s birthday and we will be up to many a shenanigan to celebrate this auspicious occasion.

I am so excited to give him his gift, I’ve been asking him almost everyday for a week if he wants to open it early.

(I’m really crap at waiting for others to open their presents. Usually I try to coerce them into doing so immediately after I have purchased the gift. Seriously I am the absolute worst. I don’t know how many times I’ve bullied M into opening things before the actual occasion. In my defense, I’m just going to state that can get really excited, okay?)

This time however, he’s fought back hard, so it will be tomorrow morning that he’ll finally get to see what I got him.

In the meantime, we’ve been out and about all day soaking up the sunshine.

This morning after we completed our compulsory tough mudder training, we glammed ourselves up and walked down to the quay for some brunch time crepes.

Here are a few snaps from the weekend so far:

Trees outside our house.

Our plans for the rest of the night.

I hope you’re smiling wherever you are.

Well, it’s all come to pass.

We have a sparkling, new, beautiful shower, and I managed to successfully attend a concert for the first time whilst flying solo.

Kaiser Chiefs are top-notch groovemeisters, so I pretty much just showed up, danced like a mad woman for an hour and a half, and then hit the road.

(The four glasses of wine I consumed before heading downtown may have had something to do with how easy the whole thing seemed. I’m normally a two-glass max kind of gal, so take this as you will.)

The one thing I will say was that I was a little bummed out about the fact that they hardly played any of their new material (or really anything from their catalogue post-2008.)

They have so many fab songs other that those featured on Yours Truly – Angry Mob and I had been eager for the chance to hear them live.

For instance, I was gutted that they didn’t play Man on Mars, a tune that I have been pretty much listening to on repeat for the last two weeks. Seriously, it’s the first thing that finally managed to knock The Decembrist’s Calamity Song off of my top jam list.

Ricky Wilson told the audience that Vancouver was their last stop on their tour, so they were probably pretty exhausted and burnt out and didn’t want to take on anything too taxing.

But overall, I must say I had a great time period, and there is always something to be said about going to a concert where you (and every other person in attendance) knows every lyric to every song that is played.

On my way home, sitting on the metro, I was trying to concentrate on anything other than the dull ringing in my ears, when a very young man sat down next to me.

The fellow was just a little too eager to strike up a conversation, so my spidey senses immediately started tingling.

Because I am a crazy weirdo, I did what I am often do in awkward situations – make them even more awkward (this time by speaking in a really terrible accent.)

This is hilarious to me, but probably insanely disconcerting to the other parties involved.

If I could muster up the appropriate amount of compunction I would, but then I always ask myself, what’s life without a little flare? A little intrigue?

So, egging myself on, I sometimes try out mein deutsche, and other times moya ruski.

This time I was from jolly old England.

Unfortunately, the dude was totally undeterred.

Even after I told him I was seven years older than him, he still asked me out.

Youth these days, I tell ya.

Either deliver my paper on time or get off my lawn!

I will give him props for gumption and guts, but needless to say, I will not be seeing him again.

(Until my next late night train ride, goodness knows.)

The next morning, I was moving a little slower than usual, due to the after effects of my solo dance party, finishing the bathroom, and the eleven kilometre run Mr. M and I completed during the previous day’s afternoon.

I figured the best thing to cure my Sunday sluggishness, was homemade crepes with fresh fruit, nutella, walnuts, whipped cream, and tea, devoured on our porch, basking in the warmth of the (long lost, and now finally found) sun’s rays.

Edit: for one bloody day at least! It just makes me want to yell out: Come on Biscuit you can do it!!!

Come on spring, you can do it!

But at the time, it was, for lack of a more poetic descriptor, absolute bliss.

Then, M and I tore about our place, vacuuming like a vacuuming things, dusting, washing, scrubbing – wiping away all the dust that had accumulated over the course of our reno, encrusted in our corners and nestled in all the often missed nooks and crannies.

Seriously, nothing is as good as clean feels.

A friend of mine remarked, after reading my post from last Friday, that I would probably pick up a ton more traffic to my blog if I posted photos of myself doing mad cleaning in my underwear.

I’m not going to lie – I briefly considered this as I tore about our place, but in the end I decided it just wasn’t worth it.

That, like my English accent, should not be encouraged.

Not without copious amounts of wine, anyway.