Did any of you get up to anything for Halloween this weekend?

Now, I know that All Hallows Eve isn’t actually happening until this Thursday, but common practice dictates that if this spooky night falls on any day other than Friday or Saturday, you celebrate on the Saturday before.

So in this vein, Marc and I, along with our terrific friends, got together on the 26th, donned our best fancy dress, and traipsed around New Westminster all night long.

It was a hilarious time and I finally, FINALLY, wore a different costume other than the one I’ve been sporting for the past eight years.

I tell ya, I really have got the market on 1920’s golfer cornered.

Marc, on the other hand, is an absolute costume maverick and has been putting together awesome showings since the first Halloween we spent together.

This year, he decided that he would dress as Chtulhu (that terrifying Lovelockian beast) and he sewed the majority of his costume from a child’s centipede costume.

Now, I thought long and hard about what I would do for my costume.

But this is never, ever going to happen, so I instead, I gravitate away from sexy and towards TERRIFYING.

Which is why I decided to dress like this:

And then proceeded to do this: 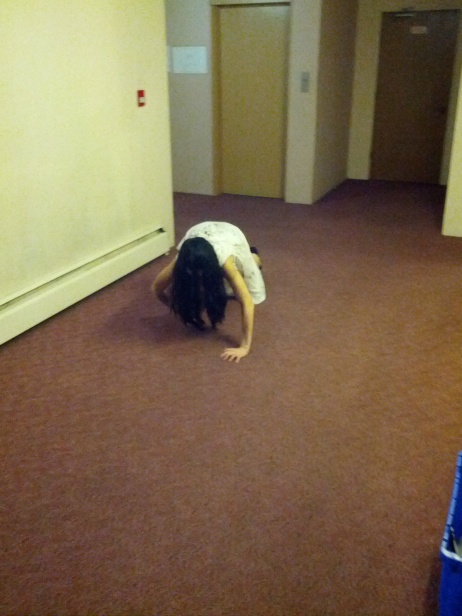 Even just looking at these photos gives me the willies.

Have you all watched The Ring?

This movie scared me so badly that I had to sleep with my mum the night that I watched it in the theatre.

And I was seventeen years old!

For the entirety of Saturday night I couldn’t even look at myself in the bathroom mirror, for fear of my own reflection.

Also, I’ve learned that nothing beats running about in a dirty, ripped nighty on one of the coldest nights of the year.

Aaaannnddd…I’m not even sure if that is sarcasm or not.

But seriously, I had to wrap myself in a wool blanket each time we ventured outside.

Thank goodness I didn’t decide to go for full authenticity and forgo shoes for the evening.

But Marc and I weren’t the only ones who put some sweet effort into our costumes – the rest of our group looked epically fantastic.

We had our Top Gear hunks:

And Sean and Ed from Sean of the Dead:

We spent the evening bar hoping around town, drinking sangria, and marvelling at all the other costumed fools and ghouls skulking about the night.

Highlights included a group rendition of The Monster Mash, a lindy-hop jam session between myself and Sean at the Heritage Grill, a late-night showing of Slither, and all the mini-chocolate bars you could possibly imagine.

This morning we all reconvened and enjoyed a late-afternoon lunch down at the Quay, marvelling at the amazing late-October sunshine in all of its glory.

We truly are incredibly lucky to live in such an amazing beautiful place.

And having the chance to run about together in costume isn’t anything to sniff about either.

(Although if you’re doing it in a nighty, I’d definitely recommend brining some tissues.)