M and I just returned from a three day salmon-catching extravaganza in the Barclay Sound with my father, and Mr. DM – alias Fish Whisperer extraordinaire.

Now, I don’t know if any of you cats have ever gone fishing before, but believe me when I saw that I was incredibly out of my element the entire time I found myself at sea. 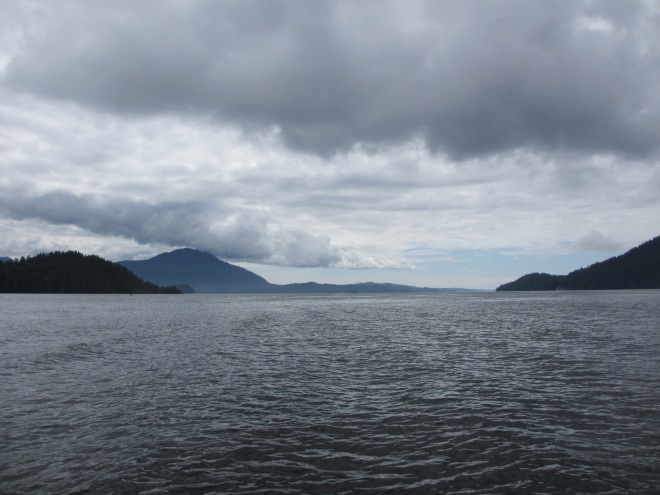 This doesn’t mean I necessarily stunk up the boat or anything (both in my fishing skills or otherwise) – in fact, I’d like to think that I actually did quite well for a first timer – it’s just that sitting in a boat for long periods of time, at all hours of the day, in all kinds of weather isn’t exactly on par with my day job.

This is how I imagined the weekend would play itself out: 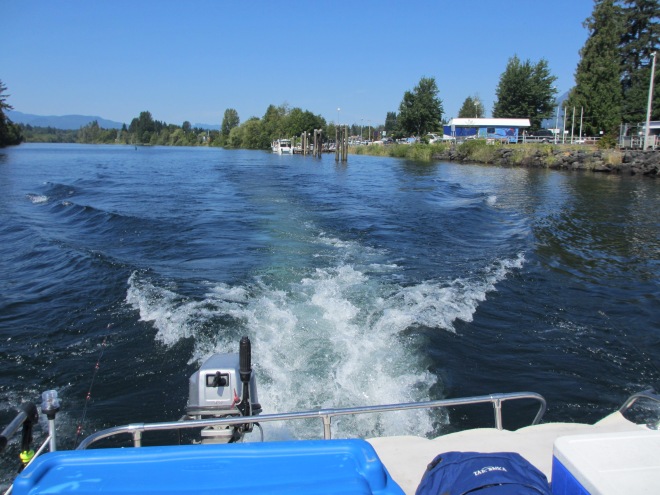 Hang out in a ridiculously beautiful area of Vancouver Island (please see photographic evidence of this very-true fact):

Fish for a couple of hours.

Arrive back at gorgeous hang-out spot.

Oh brother was I ever off. First, I was ill-prepared, both mentally and clothing-wise for the length of time we would be on the water when we arrived on Friday afternoon.

We arrived at Port Alberni around 12:30, and after dropping our gear off at Green Cove (where we would be staying) we set out to begin hunting for the elusive salmon around 2 o’clock. If you had told me that we would be spending the next seven hours on a boat I would have thought you were kidding me.

And when I say that Don (the Fish Whisperer) is one of the coolest, most skilled guys I have ever met IT IS NO LIE.

The guy is like a ninja on the water! First he sets everything up, then as soon as a rod gets a bite, he is on it like a fat kid on a smartie – turning off the outboard motor, reeling in the other reel, handing off the rod to whomever was next for a chance at the catch – and it all happens so fast if you blinked you might miss all the action.

All in all I had seven tries at the reel, and I caught six fish – three Coho and three Spring (although one of the Springs was just a baby so we had to throw it back.)

I also learned quite a bit. So in no particular order, here are some things I discovered about salmon fishing:

1.)    Get prepared to spend a heck of a lot of time in that boat. As I referenced above, we were on the water for most of the day (something I had not expected) so dress warmly, because I can’t imagine anything worse than freezing your butt off on the high seas, while praying for a fish to chomp down on that anchovy. When you are warm and cozy wearing ten thousand layers of clothing nothing will be able to dampen your spirits! (See below photo for clues on what to wear to ensure your warmth.) 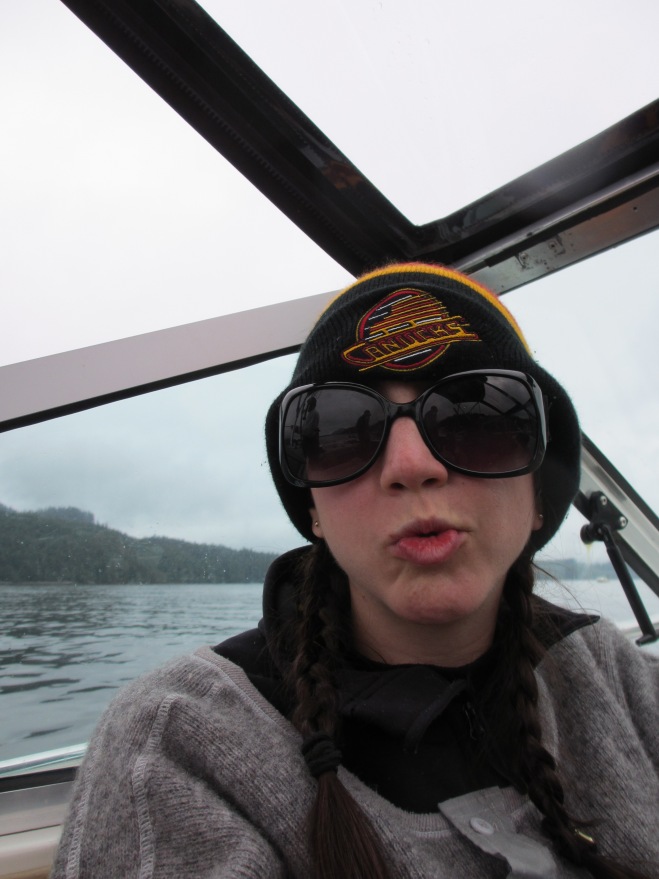 3.)    Get ready for some early mornings. On Saturday when the alarm went off at 4:45am the first two thoughts to enter my mind were: “No. I REFUSE.” Luckily after laying in bed for a few more minutes, listening to the strains of Jimmy Buffet’s XFM radio station (pretty much the best music out there for early morning wake-ups) I began to get pretty jazzed up about the start of the day. Oh yeah, drinking nineteen cups of coffee probably also helped.

4.)    WATCH YOUR ROD TIP NOT THE SALMON. ALSO, KEEP THAT SUCKER AS HIGH AS YOU CAN GET IT.

6.)    Fish are also strong! Those babies can get pretty big, and goodness knows they put up one hell of a fight as you try to reel them in. My dad actually did one of those classic falls when a fish pulled him off of his feet – otherwise known as “The Goofy.” It was insane! The best part of the whole thing? He still managed to get the fish into the boat. BOSS. 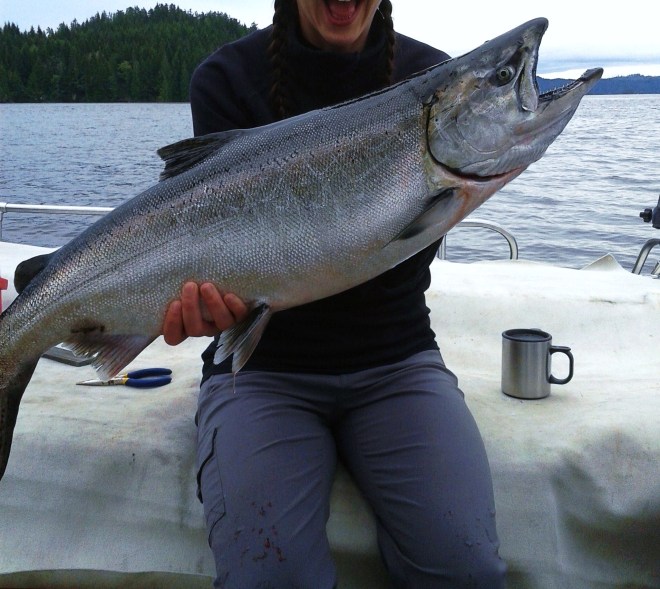 8.)    Learn how to keep a strong tack. Don’t know what that means? Neither did I! It means trying to keep the boat moving in the straightest line as possible so the bait isn’t zigzagging all over the place. This can been pretty difficult depending on the currents, wave size, and the number of other boats that happen to populate that same area. But do it right and you will feel very, very happy, as will your fellow shipmates. 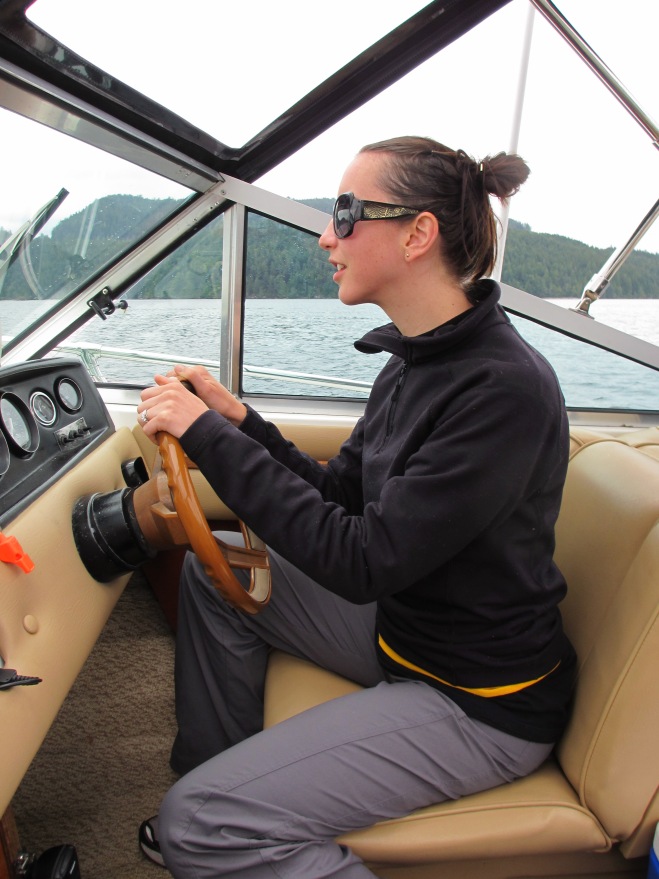 9.)    A really fun game to play while your biding your time between bites is the alphabet game – try to think of words that begin with the letters A – Z for different categories. A few groups M and I went through included European cities, American cities, and professional hockey players (double the points if you can think of someone that shares the same letter for both their first and last name.)

All it all it was really a tremendous weekend. I learned a lot, and like I said, experienced something new and totally outside of my every day routine.

I also had to laugh when a high school kid hit on me in the lineup for coffee when we were hanging out at the ferry terminal on the way home. I looked like an absolute hot mess so tack (har har) that on to my previous list of tips on how to get yourself asked out by the youngsters.

And there’s nothing fishy about that.

7 thoughts on “One fish, two fish”