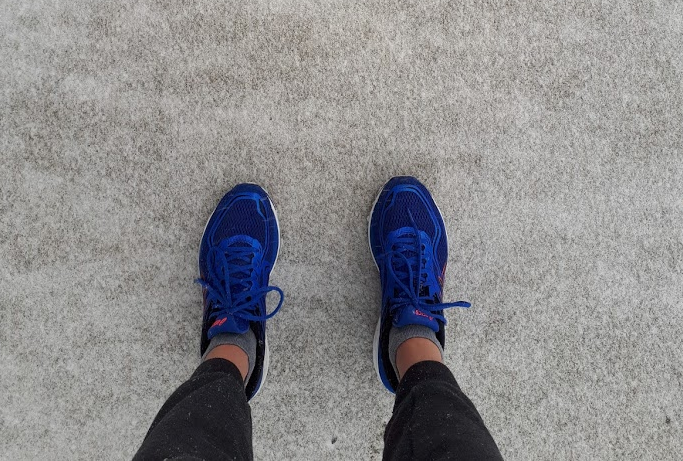 In act II, scene i of William Shakespeare’s Julius Caesar, the character Quintus Ligarius turns to Brutus and says, “Now bid me run, and I will strive with things impossible.”

I love this quote.

I love this quote because it is an excellent description of my life.

I have been running since the moment I started to walk. Growing up, I would careen about our neighbourhood, setting up races between myself and other kids, flying until I was winded, and only resting until I was ready for more.

It was like a tiny little flame had been lit inside of me, and the more I ran, the brighter it shone.

The summer after grade five was when things really began to kick off. I was pretty obsessed with Donovan Bailey and his amazing gold medal run at the 1996 Olympic Games. I would race around my house whispering, “9.84, 9.84.”

I begged my parents to let me join a local track team. They did. And I continued to fly.

Two years later, half way through grade seven, I grew eight inches and something happened. I didn’t recognize, didn’t understand my new body. At a sleepover one night with my friends, we all weighed ourselves, and I was horrified to see how much heavier I was then them all. I didn’t matter that I was almost a foot taller, I hated it.

I hated being heavy, because to me, heavy meant bad. Ugly. Wrong.

That week, I threw out my lunch for the first time. I started going to bed with ropes and scarves tied tightly around my waist, thinking it would stop me from gaining weight while I slept.

And then two years after that, at a family dinner, I forced two fingers down my throat and made myself throw up. I felt like my eyeballs and my heart were going to explode.

I did it again.

And I didn’t know how to reconcile my running – my running that made me feel strong and unstoppable – with my now constant need to control and dominate my body.

I didn’t know how to stop. Didn’t know if I wanted to stop.

So instead, I hid. From my friends, my family, teammates, coaches, and eventually boyfriends and employers. And I took my running and did everything I could to marry it to my eating disorder

Tame it, mold it. Innovate it to something that could help me exert that control.

When I was in high school, I used to eat and then run, stopping midway to force myself to throw up.

In university, I would binge and purge first. Then I would wash my face. Blow my nose, dry my tears, and smooth concealer over all of the blood vessels that I had broken under my eyes and along the tops of my cheeks.

Running after purging is scary.

Everything in my body would scream out that what I was doing was wrong. My legs rubber, my head a haze; my digestive tract a battlefield.

The long hours it would take for it to finally return to a normal, constant beat.

And I did all of this for fourteen years.

But try as I might, I could never fully extinguish that childhood flame. Every so often I could feel it flicker, warming me, from a deep part inside of me. It was a light in the darkness that helped me believe it wouldn’t always be like this.

And it helped me start talking.

To my partner. My family. A counsellor that I trusted, after meeting many that I did not.

The thing that you need to know about eating disorders, is just how insidious they are. Even when I wasn’t restricting food, or throwing up, I was thinking all of the time: how much have I ate? Have I gained weight? Do people think that I’ve gained weight? How well can I feel my hipbones? Are my clavicle more prominent than they were yesterday?

And I would run, and run, and run – through parks, up mountains, across cities on little to no food, and then I would see how long I could last post-run before I needed to eat.

I signed up for 10kms, half marathons, and marathons and would train without water or food.

Two years ago I met a friend running a MEC trail race. We began training with each other on the weekends and he began encouraging me to look at ultramarathons. I had done everything else, so why not try a new challenge?

The Tenderfoot Boogie was a fifty-five kilometer race from Squamish to Whistler, along highways, through fields and up mountains. A feat that would likely require 6 hours of running and 6 months months of training.

Training that included learning how to properly fuel my body – pre, post and inter-race.

“You’re going to have to eat while you run,” my friend told me.

And here’s the part of the story that I want to tell you that this happened. That training for this race made everything simple and easy for me. But it didn’t. I trained exactly the same as I ever had. I may have drank and ate marginally more, but never enough to properly fuel my body for training runs that would regularly take me from my house in New Westminster, right to the tip of UBC.

Truthfully, I ran that race on sheer grit. Across fields, down valleys, through fields and up mountains – literally, kilometers forty to forty-eight were straight uphill – on nothing but jellybeans and a some peanut butter.

At kilometer forty-nine I wept into my husband’s arms, horrified that I still had six more kilometers to go. As he gently encouraged me, whispering how well I was doing and how far I had come, I stumbled over to the food table. I picked up a chunk of fried potato, dunked it into a vat of salt, and shoved it into my mouth.

It was the greatest thing I have ever tasted.

Eating that food brought me to life. I ran those last six kilometers in thirty-six minutes. It was the first time that I properly understood what it felt like to give your body what it needs, in order for it to do something you want to do. And every time I think about going out for a run without eating, I think of that moment. I remember.

And I’ve realized that I had it wrong all along. I couldn’t innovate my running into being an agent of my eating disorder, because it was the antidote, all along. And I’m proud to say that I haven’t thrown up since that race.

I choose recovery every day.

I know will always struggle with my impossible. But I will always run so that I can strive with it too.

2 thoughts on “Running through it: The story of my eating disorder”