In 2007, I entered a short fiction contest through the Walrus magazine. The competition was held in conjunction with a literary seminar series that was run out of Concordia University, and the winner was awarded a full-month scholarship to attend a seminar of their choice.

My submission was a story I had written based on my relationship with my doubles badminton partner Kristy when we were fourteen years old and playing at the junior national level. The piece was choc-a-bloc full of metaphors for sex and featured the best dinner prank one can ever play (ask me about it the next time you see me). To this day it’s one of my favourite stories that I’ve ever written.

I ended up being a finalist, and as such, was awarded a scholarship to take part in a two-week writing seminar in St. Petersburg, that coming July.

I went, and for two and half weeks had one of the craziest, most brilliant, most out of this world adventure a twenty-two-year-old girl possibly could ask for.

I’ve never tired of writing about my trip, and have penned entries about the time that I got beat up by a babushka in the Russian sauna, and about the opulence and depravity of Nevsky Prospekt, and about my heartbreaking hike to the Siege of Leningrad memorial and about how the city’s heart beat has never stopped.

I’ve also written about how, even in Russia, I am always the weirdest dancer in the club.

Which was why I was so excited to return to the city – return to one-half of my ancestral motherland – with my actual mother.

I spent so much of that half-month by myself: visiting museums and memorials; eating at the strangest of restaurants and marching about huge lengths of the city. Most of my cohort was older, and while I blew off every class, they spent their days in tutorials and lectures. It can be incredibly difficult to validate a life-changing moment when no one is around to experience it with you.

I wanted to have someone there to see the beauty and the insanity and the brilliance; the heartbeat that makes this place thrum and thrive and triumph and break.

The only problem being, for the eighteen days that I called this city home, I was able to do as I wished. I could go where I wanted and take the metro when needed. I could explore the marketplace and visit the ballet and philharmonic and wander the canals and drink canned gin and tonics at the banks of the Neva.

This time, we had to explore the city by bus and listen to the same narrative by each tour guide, as they explained that the city was founded by Peter the Great in 1703 and Catherine, also a great, hated her son Paul, but really loved her boyfriend Griegory.

And it’s not as thought any of this is bad. To be able to have two days to spend with my mother in a city as dynamic and brilliant as this, is a memory I have tucked deep down into the depths of my heart.

But I can’t help but be reminded of all of the tales I have heard and read of tourists during the Soviet era: who all stayed at the same hotel, and who all received the same tour, and ate at the same restaurants, and who shopped at the same stores. The omnipresent desire and need to control the narrative, and to define the stories, that return home with the foreigners who come to the city.

Driving into St. Petersburg from the docks, we passed a monolithic Soviet structure with the letters “Park Hotel” affixed to the top. The dichotomy between the western name, and the communist architecture was jarring. One just might think that the rooms in that structure still bugged, and that the recordings are submitted to Putin for personal screening.

Let’s get super James Bond here, why don’t we?

But I would like to stress how wonderful a time we had in Russia.

We visited Catherine the Great’s summer palace in the village of the Tzars. Old Kate was woman truly after my own heart. A pre-first wave feminist, she was all about educating women and, like her counterpart Victoria, was a total boss when it came to dominating empirical politics – going so far as to have her husband knocked-off, and then totally cock-blocking her son Paul (in the parlance of our times) until his untimely murder (aka accidental strangling.)

We had a fantastic morning exploring the Hermitage – marveling at the exquisite and completely overdone Winter Palace.

I absolutely loved being able to show my mum the Peter and Paul Fortress and the Church on Spilled Blood and St. Isaac’s Cathedral.

Plus I got to procure these amazing Russian author nesting dolls. 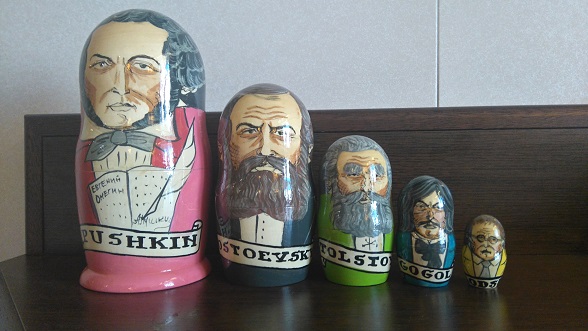 They may just be my most favourite things I’ve ever bought.

But mostly I just loved seeing her marvel at it all. I liked talking her through how poorly people were treated during the reign of the Tzars, and how the Siege of Leningrad lasted for 900 days, and how Alexander the II was actually a liberal and a reformer, and if the Decembrists hadn’t blown of his legs things might have unfolded a little differently in this country.

It’s so interesting. Having read so much about what it was like to be a tourist under the Soviet Union, and then to experience something that felt so very similar, despite having lived a markedly different experience, I am again so reminded that no matter how much changes, things definitely do remain the same.

Which is why it’s important to have people you love with whom you can experience these moments.

Because before I was alone.

And when you’re alone, it feels but a dream.