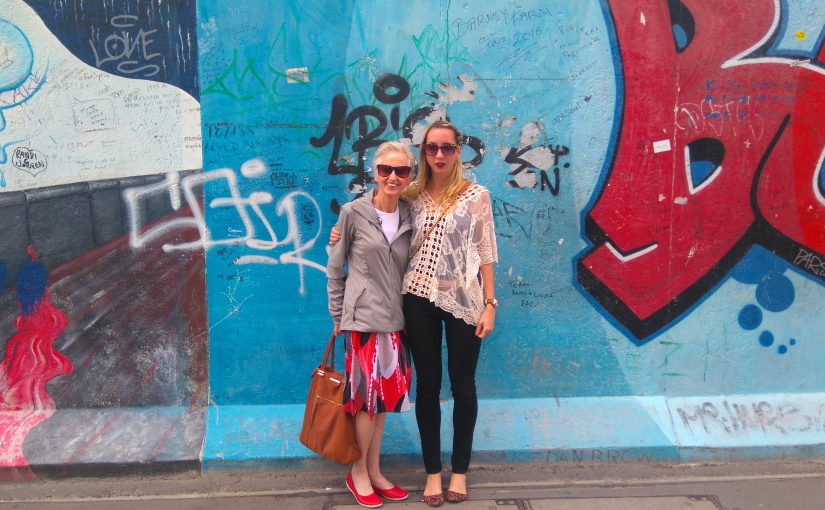 Berlin is the coolest city I have ever visited.

Mum and I began our day to the sad strains of a 5 AM wake up call. A coach would be leaving the port at 6:20 AM to take us to the city, and being as it were that we were located some two hundred and thirty kilometers north of Berlin, it was imperative that we shake a leg.

The drive into Germany’s capital was beautiful. Wide, undulating fields of wheat reflected the early morning sun’s golden rays, while wind-powered turbines stretched skywards, standing a start white against the turquoise of the sky.

I read and dozed while my mum, card carrying member of the intelligentsia, practiced her bridge game. It really warms my heart to know there are enough players out there to warrant the monthly publication of the literary piece known as ‘The Bridge Bulletin’.

When we arrived in the city, we met Andrea, our intrepid guide who would accompany us throughout the day.

After biking across two cities, my mum opted for a less-exercise intensive introduction to Berlin, so we walked and drove about as Andrea recounted Berlin’s history, beginning in 1237, and all the way up to unification.

The city was a-buzz in football fever, with some 100,000 Berliners heading to Tiergarten park to watch Germany play Slovakia in the Euro Cup.

We visited the Brandenburg Gate, the Bundestag, and passed the CDU and SPD headquarters (where at the former, I said a silent, but emphatic, hello to Angela Merkel.) Humboldt University is astoundingly gorgeous, and just standing out outside of the buildings one can understand how brilliant it would be to attend as a scholar, or be employed as an academic.

The tomb commemorating those who have fallen in wars and armed conflict stands just across the street and was equally affecting, though for, of course, wildly divergent reasons.

The sculpture, housed inside of a building that was once a guard house for the German royal family, is a mother weeping over the body of her dead son. There is a hole cut out in the ceiling so that no matter what the outside elements, the sculpture stands firm. In the fall, leaves fall through the roof, in the winter snow. Yesterday, it is a solid stream of sunlight, illuminating her cold grief.

At the East Side Gallery, we saw Brezhnev kissing Honecker, kaleidoscopes of colour, and calls for peace. There no better place to take arty-artsy photos of yourself, than this wall. 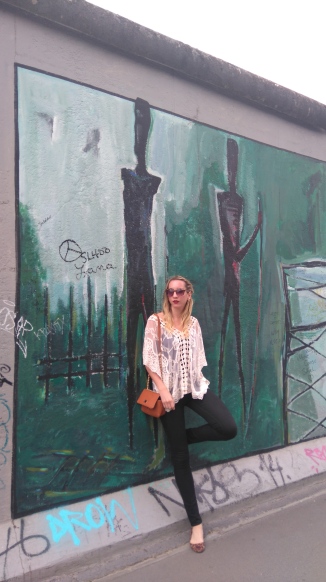 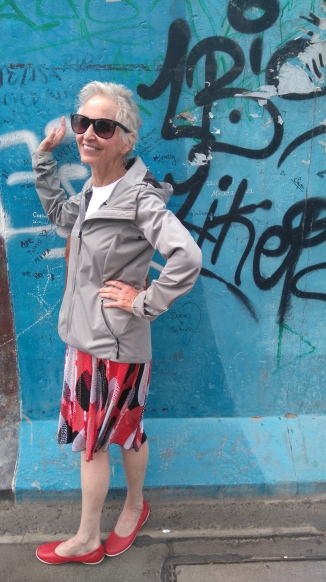 We slowly walked through the Holocaust memorial, and I quietly lost my mind at the family of tourists who were playing hide and seek amongst the installation, and even more so at the couples making out and sun tanning on top of it. Afterwards, we walked to The Topography of Terror, where along the way we passed the German Finance Ministry, that was once the seat of Hermann Goering’s Luftwaffe, which incredibly, was one of the only buildings not hit by allied missiles during the war. On the east side of the building, there is a remarkable display of DDR propaganda that depicts utopian socialist ideals: the happiest workers you could ever meet.

Kreutzberg is cool. Just the coolest. And we didn’t spend nearly enough time in this neighbourhood. Alas.

Checkpoint Charlie is insane and made me feel really weird to see a place with such incredible historical significance turned into a three-ringed circus. How insanely ironic that this place, once the border crossing into a communist country and a symbol of its citizens’ loss of movement, is now a shopping centre where once can pay to have their photo taken with fake American soldiers and then eat their lunch at KFC.

Did you know that Berlin’s Tempelhof Airport is now a space for citizens to use as they like? That people come to bike, run, fly kites, have picnics, and spend time together on sunny days? That the government put its use to vote by Berliners to see what they wanted done with the space and they overwhelmingly chose to keep it as it is, and to keep using it as a communal space?

To keep it for the people.

Sometimes I can get carried away about countries that I have read and read and read about in novels and textbooks and what I’ve seen in movies and plays. I try to live by the narratives that I have loved, but not lived. I try to imagine Grass and Boll and Remarque and Timm and Wolf and in the end I need to relinquish and let go.

Coming to Berlin was amazing because I was there with my mother. A woman who has shaped my narrative and my stories. A woman who will walk with me for two hours instead of sitting down to lunch because she knows that I want to see Alexanderplatz station even though she knows we won’t make it in time, but we’ll stumble over to the Berlin Concert hall instead, and goodness is it ever grand. 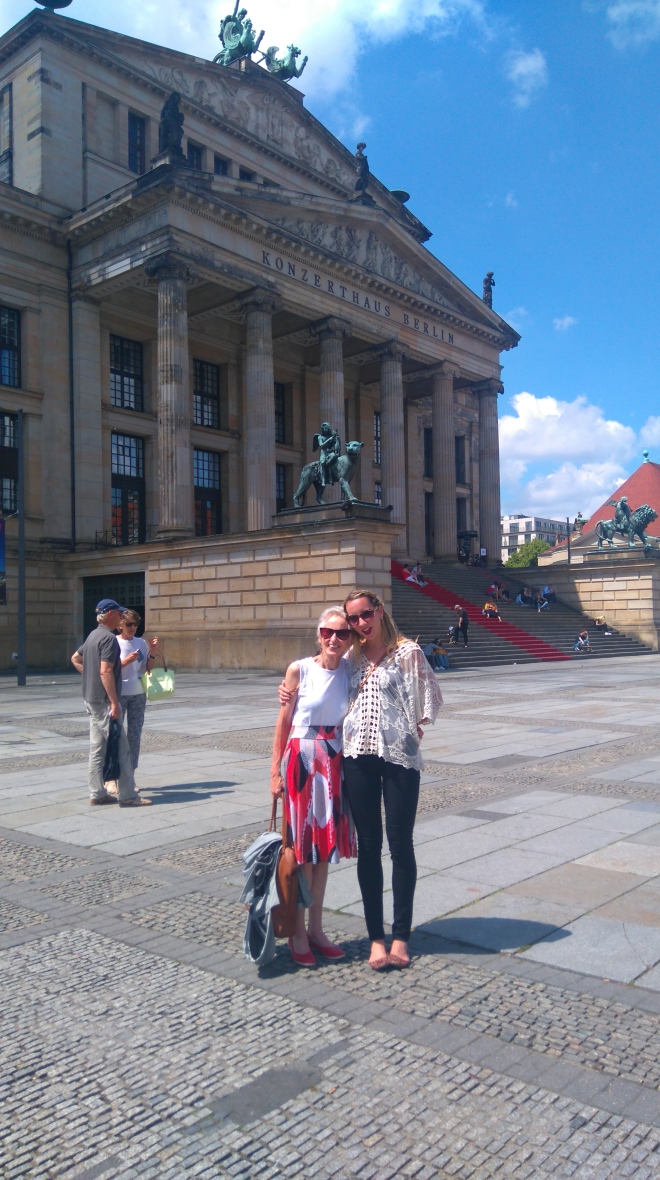 I will undoubtedly come to Berlin again. I’ll rent a bike and see Marx and Engels; I’ll go to the symphony and visit museums and I’ll eat curried sausage in Kreutzberg and dance at some club.

But today was for mum.

Who likes Angela Merkel as much as I.

And who undoubtedly also said hello, as we passed her by.