Somewhere along the way I started to like baths.

First, please, do not conflate baths with bathing. I think I have committed to the record enough times my utter obsession with cleanliness that there should be no mistake on anyone’s part to that of which I write – however, it is always best to err on the side of caution when it comes to these things, lest I be construed as some sort of horribly unwashed miscreant, who only now, in her thirtieth year, has come to appreciate a good scrub-a-dub.

I have always, always loved to be clean.

What I haven’t always loved is one method to which this purity might be achieved.

I’ve even written a pair of entries chronicling my distaste for sitting in bathtubs, long waxing eloquent on how easily overheated one becomes just lying there, awash in your own filth and sweat; how horribly hard it is to read in that semi-reclined position, and never really knowing what to do with your hands, as they slowly freeze to death while the rest of your body steams itself alive.

(Honestly, you can imagine how surprised I am that Whirlpool has never scooped me up to do all of their advertising copy writing.)

However, this summer I had a horrible biking accident wherein I almost ran over a four-year old boy, and in my attempt not to take his life, I ended up taking a few years off of mine. I shredded my left arm and leg, and took a very scary knock to my head that once again reinforced my absolute infatuation with my helmet. 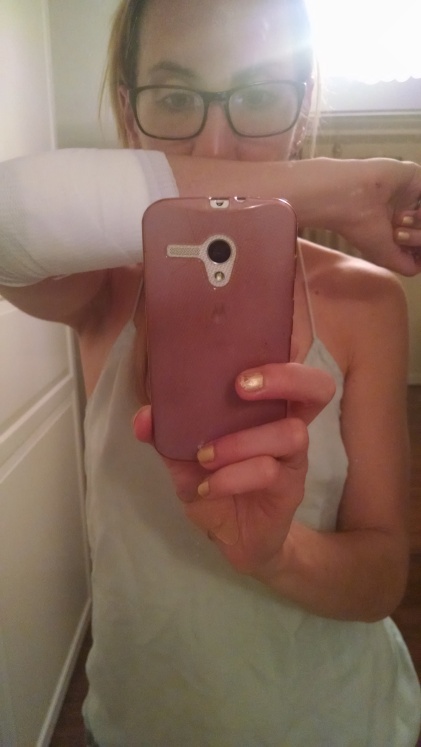 Overall, I was left pretty shaken up.

The utter worst of it all was the fact that my skin was not just a grated mess, but one chock-a-block full of gravel and dirt (beautifully mixed in with my literal blood, sweat, and tears) which meant that as soon as I arrived home I was sent straight to the bath to soak my wounds in epsom salts and self-pity.

And how did I ever endure the full-body sting.

But, strange as it might seem, it was that summer afternoon, spent in that incredibly vulnerable position (there really can be nothing more helpless than sitting nude in the bath, your body a kind of delayed sunset – as it slowly changes colours at different times and paces – wracked with pain, and overcome with astonishment at how life can and should never be taken for granted) that I realized with surprise:

“Wow. This is actually kind of pleasant.”

I didn’t really think much of it until two days ago when I arrived home after a very long and very tiring twenty-five kilometer run into Vancouver. Arriving at Granville Island I was a perfect mixture of happiness, awe, and trepidation. The mercury that day was hovering just above freezing, and I knew that I was probably going to get chilled on my way home, no matter how quickly I made it to transit. Just walking to skytrain I had to keep rubbing my hands on the back of my neck, as I could feel the slow sting of the cold creep into each one of my fingers.

On transit I listened to music and cursed Translink – the one time I had hoped for an extra-heated train car seemed to the one time it would not be available.

When I arrived back in New Westminster I spent the last of my energy reserves to run home, sticking to the sunniest sides of the streets, taking short, quick strides, and hoping that my tired muscles wouldn’t balk at the steep hill that marks the way back to our house.

The only thing I could think of the entire time was the piping hot bath (complete with epsom salts) that I was going to take as soon as I walked through the front door.

Two steps into the living room and I was already disrobing, throwing my sweat (and now frost-ridden) clothes into the laundry basket. I turned on the radio in the kitchen, grabbed a fresh towel from the linen closet, and turned on the faucet.

It was all I could do to not climb in then and there (but the cool porcelain of an un-filled tub would probably have killed me) and I was not about to expire after twenty-five kilometers in my recovery bath.

The water was wonderful, and my time in the tub left me feeling light, limber, and completely rejuvenated for the rest of the day. I slept like a baby that night, and the next day was able to run a fast 5k and bike eight.

So it came to nobody’s surprise (myself being nobody here – call me Odysseus just this once) that after this morning’s fog-ridden, freezing run I found myself once again not only sitting square in my bathtub, but reading at that.

I honestly don’t know what to say.

I guess people really do change.

So to everyone whom I resoundingly ridiculed over the last sixteen years of my (now ended) bathlessness – I apologize, and beg of your forgiveness.

I embrace bathing (in the context of sitting in a bath, by myself, washing my physical and metaphorical wounds.)

But don’t even try me on hot tubs.

I’ll need another fifteen years to even consider them.