I have runner’s feet. 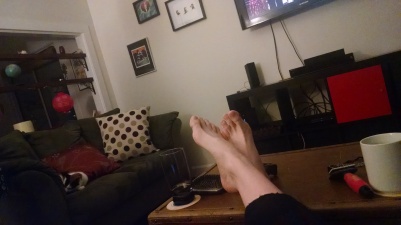 And I am okay with this.

I am fine with my blisters and callouses, my rough skin and my high arches. My second toe on both feet remind me a bit of aliens, which is funny to myself and a source of hilarity to Marc.

I really like painting my nails during the summer months, because I think (but really mostly hope) that the colours take the focus away from all of the above.

Because as much as I’d love to think that everyone is as okay with my feet as I am – I cannot begin to imagine that this is the truth.

Last night I was at a dinner party and wasn’t wearing any socks. Incredibly aware of the now long-suffering (and completely innocuous) blood-blister on my left right toe, I felt as though I needed to head the message off at the pass, and immediately told my hosts:

“THAT’S NOT A WART IT’S A BLOOD BLOSTER FROM RUNNING,” while pointing at my foot.

They were suitably caught off guard, and told me that hadn’t even noticed it.

Which made me feel weird having called attention to it in the first place, and then I spent a large portion of the night simultaneously trying to hide my toe, and wondering if they were now, in fact, checking out the blister.

I also have a ridge of callouses that begins on my right big toe, and then migrates down the length of my in-step. I like to call it the Queensborough Ridge, as I think it sounds both regale and fun, and because I regularly run over the Queensborough Bridge on my very long runs.

Feet truly are such incredible things.

Mine have taken me to some of the most beautiful places in the world. They fit into ridiculous heels, and float about in my favourite pair of men’s oxfords. They are the reason that I can run like the wind and dance like a mad woman, and they are the reason that my husband screams in agony when I put them up against his back in the middle of the night (because they are freezing and he is warm.)

And I love them.

So I think I may have just watched eight episodes of House of Cards?

I can no longer keep count.

I’m really not into the show, I’ve just invested too much time that I need to find out what happens.

The one thing I’ll give Clair Underwood is that she has some absolutely badass running outfits. But other than that, she and Frank are just the worst.

And the writing is absolute bollocks.

When it comes to shows about US political shows, I’ll take Veep over anything else.

But I do want her running outfits.

The other morning I was out running before work and a man who was out walking his dog shouted at me, “GIRL YOU’RE MAKING MY DAY!”

Normally I get a little shirty when random men shout things in my direction, but this actually made my little heart smile.

Which is pretty great.

(But good thing he never saw my feet.)