This Friday I went and watched Marc’s last soccer game of the season (he coaches the senior boys at his school) and for an hour and half I had the chance to enjoy the late October sunshine and cheer on the team.

Standing there, basking in that golden glow, all I wanted to do was pack a bag, grab our tent, and head off into the woods somewhere for a weekend of autumnal camping.

But boy did I ever used to loathe this pastime.

It’s true – I was definitely a late-bloomer when it came to my love of tent life. For many moons I openly rejected the idea of sleeping in a bag, eating with sporks, and wearing long-johns as pants.

I was firmly averse to forest-bound adventures.

It was the worst.

Factor in that I was a bit of a prima donna, and you can imagine just how awful it was to have me hanging around whatever campsite my dad and sisters happened to be visiting.

As soon as I ate what little junk food we had managed to persuade my dad to purchase for us, I would settle into a deep, dark sulk that would last right up until the moment we pulled up stakes and headed back towards civilization.

I remember one trip with my dad and my little sister. One morning we woke up and I demanded that we go to White Spot for breakfast. I was adamant in my claim that I would not eat one more dry bunch of shredded wheat (you know the ones – they look like mini bales of hay) for my morning meal.

My dad, who remains until this day a truly passionate anti-White Spot kind of guy, tried his best at negotiation, and offered up this doozy:

“How about we go to a bed and breakfast, and see if we can pay for just the breakfast?”

I sat there, mortified.

What kind of person would even think of such a thing?

I told him flat out that I would in no way partake in this ridiculous scam. If he even attempted such a charade I would hide in the backseat of the car.

Of course he called me on my bluff (either that or he just didn’t have any energy to deal with my drama queen behaviour).

So there I sat, trying my hardest to remain unseen as I peeked out of the car’s back window, watching as he and my little sister (whose sweater was so dirty that she was now wearing it inside out) rang the bell of the first bed and breakfast we had come across.

Seriously, they looked like they had just jumped off of a passing train car. All they were missing was the bandana tied to the end of a broom stick.

Hey buddy – can ya spare a dime?

Needless to say, they didn’t get the breakfast.

And we ended up eating at White Spot.

After that, I really didn’t camp again for a long, long time. Not until I started dating Marc and he made it very clear that he loved spending time (sleeping time especially) in the great outdoors, and he very much wished to share this love with me.

I thought it was high-time to give ye olde tent extravaganza another try (it had been a good twelve years or so since my last camping trip), and I agreed to head to Harrison Hot Springs for a weekend.

The plan was to participate in a slow-food bike tour around Agassiz that morning, and the camp that evening.

It was going to be all fires, and hot chocolate, and sleeping bag snuggles.

Instead, we bicycled through a monsoon, Marc forgot the sleeping bags, and our air mattress leaked.

We spent the entire night shivering under our car’s emergency blanket, taking turns pumping up the mattress, and listening to the thunder storm wreak havoc on our surrounding environs.

But you know the craziest thing?

I actually loved it.

And to this day, we laugh just thinking about that weekend.

Since them, we’ve camped a number of times, all around BC and Oregon, and each trip has been absolutely fabulous. 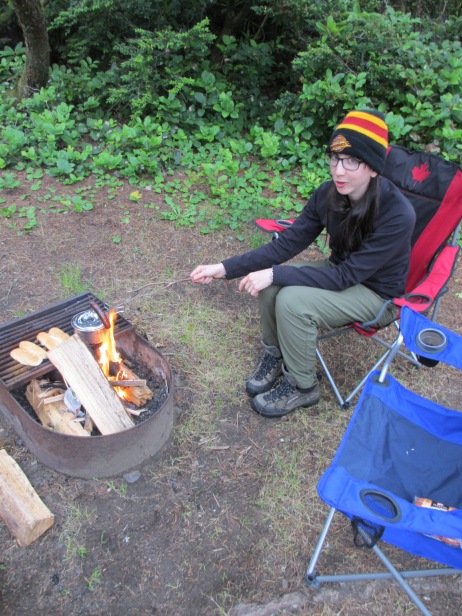 I’m also happy to say that I no longer eat at White Spot.

And I’d probably still only eat the breakfast, if prefaced by “Bed and.”

Because you know what they say  – some things will never change.